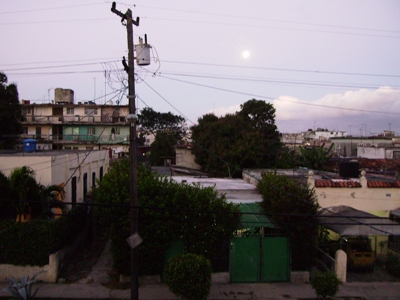 The poem wasn’t written, it was drawn in front of my terrace. Behind the battered, uneven and ugly TV antennas, the unpainted neighborhood houses, the roofs turned into storage rooms, and the hanging electrical wires, nature’s fine brushes gave us a relic of the night, a sleepy moon standing out as a white spot surrounded by moisture in the pale blue of the dawn.

It could be an image that is repeated at times; but after much struggling on the ground, I often forget to raise my eyes to the heavens, so I did not realize the singular beauty that the lazy moon can bring to a new day. Am I becoming a lunatic?