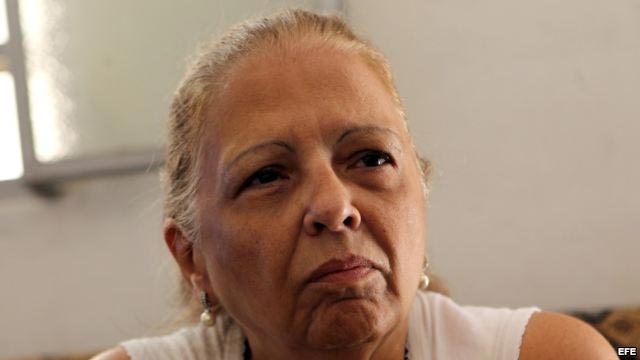 On Tuesday we learned of the beating of Marta Beatriz. They didn’t just beat her, they also dragged her up the stairs, 31 steps, beating her neck and whole body. I did not ask Marta’s age but she is an older woman, perhaps older than 60. She was the only woman in the group of 75 (from the Black Spring of 2003), imprisoned for her activism and for publishing her opinions against the regime.

She, a group of activists and friends, had been standing in front of the Zanja police station to protest the harassment she suffers from some of her neighbors.

That morning Marta had refused to let her house be fumigated with smoke and oil, an invasion on the pretext of doing away with the mosquito that carried dengue fever. There are other methods of fumigation, which here they call “special” that also eliminate the larva and the mosquitoes, but that was not available and the smoke was spreading into the house through the slats of the blinds, and the smoke is toxic for people with asthma and any respiratory problems, like her.

I can’t stand even the noise these smoke machines make and also that any stranger can come into our rooms. Sometimes they must enter our houses along, because if the smoke injures us they assume we have to leave for them to fumigate, and trust they won’t touch any of our personal things.

To me, it seems like a form of violation of our spaces. On the other hand, the city is full of trash dumps and potential breeding grounds for mosquito larva, huge deposits of stinking water. But our houses are preferred by the State.

Marta had spent the whole night in front of the police station, protesting. At 7 in the morning a police car stopped in front of her she was taken by force by two of those rude women who join the Ministry of the Interior — it’s sad to see what they turn into because of their envy and hatred, attacking without scruples any enemy o the government.If the order was to kill they would kill. It seems they have no conscience.

They are the result of ideological propaganda and the zone of ignorance fed to them by the free education of the State. Later you see them coveting any trinket, proudly receiving some jewelry, probably the fruit of Customs forfeitures, as a reward for their cruelty.

The two MININT women were beating Marta the whole way, stopping at the entrance to the building where she lives, on Belascoain, and dragging her out of the car. They continued dragging her up the stairs without allowing her to stand up, the 31 steps to the door of her house.

Since then her home has been under siege by the police. The second day didn’t let her 17-year-old nephew come up to bring her juice. The two activists with her happened to be in the house because they went there to make coffee to take to the Station, and were surprised to see Marta beaten, swollen and bruised, with the veins of her arms and legs on the point of splitting from so much trauma. They won’t let them see her, which seems to be the point of the siege at the house; perhaps they are waiting for the bruises to fade.

But Marta Beatriz hasn’t been able to be seen by a doctor. She is taking anti-inflammatory pills that have begun to damage her stomach. Yesterday they were arresting all those who came to visit.