HAVANA – Cuba. Perhaps the tenor Placido Domingo nostalgically remembers his stay in Havana. If he does, the Grand Hotel undoubtedly would occupy a special corner in his memory. Unfortunately for us, although perhaps luckily for her, Maria Cervantes, jewel of Cuban pianists and songs, she did not live long enough to witness the ghostly ruins of that place in whose lobby she shone brilliantly.

The Grand Hotel is one of the monuments of an earlier Havana whose restoration seems impossible. What remains of that solid building taking up an entire block (between Teniente Rey, Zulueta, Monserrate and Dragones), is nothing more than a picturesque specter, representative of the current mood of the city as a showcase of underdevelopment and poverty.

“La vida loca,” announces a phrase written on one side of the old hotel. Its anonymous author, possibly unintentionally, managed to synthesize an amalgam of thoughts that go through our minds when we stop and observe it.

Apparently, someone, many years ago, intended to rescue the Grand Hotel. So a strong scaffolding was mounted around the sides. However, time passed, and it was all forgotten, to the point where within those metals structures a forest has grown with no less exuberance than in the Island’s abandoned fields. 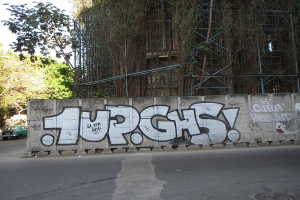 Anyone seeing it might thing that the lack of attention was specifically intended to convert the place into another green lung for Havana.

Opened in 1925, in a very solid and modern construction for its time, the Grand Hotel was famous for being the cleanest and cheapest in our capital. Old Havanans especially remember its slogan, “One hundred rooms with bath,” where free 24-hour accommodation was granted to everyone from the interior of Cuba who came in the Diario de la Marina express for the express purpose of staying there two days.

The reputation of good service, along with its affordable prices and its privileged  location (one block from the Capitol or the Prado, and the doors of the historical center) assured it a commercial preeminence for a long time, and also ensured its special recognition by of the capital’s citizens.

It could have stayed in business for much longer, as a hotel or large housing complex for Havanans. But government laziness and irresponsibility transformed it into a three-story thicket.

Note: This author’s books can be acquired on Amazon at this link, and also here. His blog is here. 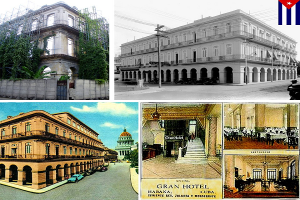