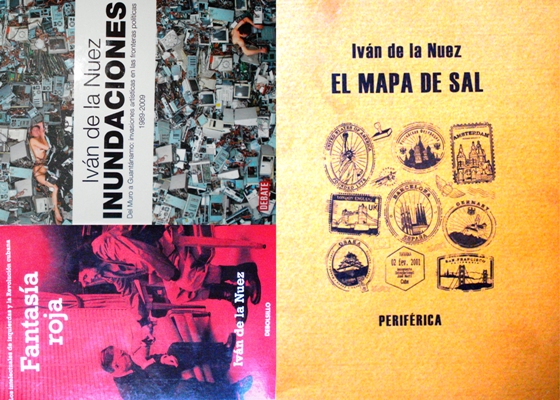 I met Ivan de la Nuez one day in February of 1998. It was in Holguin, and he wasn’t present but someone gave us a catalogue of an exposition which he had displayed over at Barcelona. I had quickly read it on the Cuba Gazette multiple times. But now, I’ve received three of his colorful books wrapped in nylon: “Three Messages, Three Suggestions, Three Literary Cartographies to live without Fear, or to at least hold hands with someone who will guide you through the anxieties we live with today”, “Where do we live?”, and “Who brought us to this catastrophe known as post-communist Cuba”. They are answers that are found attached to the pages of these books. Out of all them, the one which most interests me is the boldest of publications, the book called “The Map of Salt”, now nearly ten years after its publication in Periferica. After a decade of circulating through the hands of readers all over the world, it has arrived in a dark provincial corner of this island. And that’s how the paradoxes are, the pretexts, the destinies. Since Ivan has proposed to dismantle the myth of insularity and the supposed national identity, to dismount them in the sense of discovering them, removing the veil, the sequin, and the false hieratic pose, he has then attempted to build over the very salt and ruins of what we are today.

They are a set of magnificent essays. Matias Perez, the legendary character from Havana, the National Anthem mixed with individualistic insinuations (not as a warlike march), and an imported reference to Che Guevara, all parade before the cynical and sarcastic prose of Ivan. The expressions of those identities, in the words of Hanna Arendt, go beyond any physical marks — I’ll remember that always.

The Map of Salt which De la Nuez would return to the world a decade ago was intended to continue showing us the path of new discoveries of disillusion, apathy, and the rejection of a unitarian national mark of being Cuban, and has returned today, with much more strength. This is the map of an observer who has been left awestruck before all the events of the last 20 years, and has changed the iconic Korda photo with a hairy Che amidst the breezes of Havana in the 1960’s with a dead guerrillero in a laundry room of La Higuera. The socialist world, eaten up by its own rodents, the New Man that Guevara himself wanted, forced to fill out immigration papers which deny a world open to everyone, and a socialist youth, supposedly limpid, forced to eat at McDonald’s (symbol of “wild capitalism”) because of the rationing.

It’s a good attempt by Ivan, trying to recover his life right at the point where his dream was crushed. It’s the best possible reason to celebrate the ten-year anniversary of a book we could barely find in Cuba, that Map of Salt that we couldn’t taste back then, but which is given context by the deficiencies of our nation. For now it’s enough to be able to read his Red Fantasy (published by Debolsillo, 2010) and Floods (Debate, 2010), with the certainty that one is attending a first act. Half a year is nothing compared to five centuries of delay.

I invite my readers to reach out to Ivan (who isn’t so terrible). To read his books, which are a reconstruction of that traveler we all are, carrying the island on our backs… or maybe to just ignore him. Who knows.