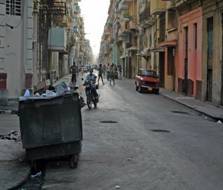 A careful read of the extensive article, “A look at the Cuban model of wellbeing,” published in the daily Granma on 13 May 2013, raised, for me, some doubts and disagreements.

The cases with which the article begins are people of different ages who, for one personal reason or others, have decided to return to live in Cuba, representing an insignificant percent of the hundreds of thousands who have not, and who prefer to continue developing their life projects in line with other wellbeing models overseas, despite the economic crisis, the violence, unemployment, social isolation, rootlessness, the distance from their lived ones, the exclusion, discrimination, lack of solidarity, etc.

On the basis of these atypical cases, the entire posterior argument is structured, emphasizing the lack of a feeling of exclusion, the social spaces, social solidarity and the collective creativity and intelligence.

To suggest that there is no feeling of exclusion because everyone in the neighborhood knows everyone else, is an incredibly trivial argument, as is defending the bad custom of sticking your nose in other people’s lives, which is the result of the widespread surveillance among neighbors, leading to envy, gossip and the existence of mandatory collective activities which, far from avoiding exclusion, directly threaten the individuality of citizens, which should be respected.

In reality, seeing the same faces every day if pretty boring. The number of Cubans who gather in a park or sit around a table playing dominoes in a yard or even on a sidewalk is not an achievement, quite the contrary: it shows the lack of social spaces where one can visit in a pleasant and civilized way, the lack of recreation societies, clubs, fraternities, schools, etc. Perhaps these Cubans, if they had the financial resources, would prefer national or international tourism, or to go fishing in their boats, to meet with their friends in a cafe or restaurant, etc.

To argue that raising the standard of living causes isolation is to ignore the development of precisely the new information technologies that allow one to connect to the entire world (which is not the case of Cuba where Internet is banned) and to expand relationships beyond the family, neighbors, the neighborhood, municipality, the province and even the country. More than knowing one’s next door neighbor and knowing all about him, which constitutes an invasion of his privacy and has the stink of too much politics, how one can know many different people with distinct models of wellbeing and exchange opinions and experiences and even compare them.

It is a mistake to confuse socializing with overcrowding. In our neighborhoods, because of the housing shortage and the poor state of most existing housing, several generations of the same family, and sometimes several families, occupy the same space previously occupied by a single family, undermining the personal life of their different members, a situation that is repeated with the next door neighbors and so on continuously.

The well-known “hot beds” — which is the same bed shared in turn by different people — of Central Havana, are not examples of socialization, but of extreme poverty.

The same thing happens with the crowds at bus stops, waiting for the bus that never comes, and the lines for bread and other products. Contributing their grains of sand to this “socialization” are the low wages, the meager pensions and the widespread inefficiency.

To look for this “socialization” in organized societies where citizens have economic independence is somewhat difficult, because they do not depend on each other, much less on their neighbors. They each live their life and make these individual lives form the life of the community.

Even more difficult is trying to find it in airports, subways and concrete blocks. I’m almost convinced that many of the people forced the shelters and hostels in Havana, would like not having to be face to face with their relatives and neighbors every second of the day and night, and would appreciate a few moments of solitude and tranquility.

The “us” that they are proposing to recover is not a sound proposal and has already been used too much in this country as an excuse to have our compatriots faced with the mistakes and deficiencies to set aside the brave “I” both for good and bad.

Whether in the sharing of the bottle, or transport, or the collective use of a private telephone, or in handing down school uniforms, or in shared snacks or shared medicine, it is not solidarity that is demonstrated, but only insufficiencies and shortages, unresolved for over fifty years of failed social experiments.

To suggest, generically, that in Cuba we can talk and have multiple social exchanges and we can afford a the luxury of a nice chat with many people, because of our high culture and education, is more a joke than a serious argument. Here, when talking or chatting citizens are careful who their partners are and must measure their words, for fear that it may cause them personal problems. Wielding the double standard (I think one thing and I say another: the official line) makes  conversations and honest chats difficult.

To strengthen the Cuban model of wellbeing, they propose not to have more but to be more, not to create more wealth, but more humanity, and to live well rather than better. In addition to rejecting the just natural desire of every human being to prosper, they suggest something a little ethereal and confusing for the ordinary Cuban, because they say absolutely nothing, seems more like the slogans of those who also say absolutely nothing.

If they actually want to achieve the wellbeing we do not have, do not waste any more time trying to present our difficulties, weaknesses, misfortunes and shortcomings as the original components of wellbeing. They are actually the “anti-well-being” components of the Cuban model. Wellbeing is only achieved by working and creating wealth, for which, in our case, profound economic, political and social changes are essential. There is no Cuban model of wellbeing, simply because the other model, the political, economic and social, the so-called socialist model, is a failure and has been incapable of achieving it.