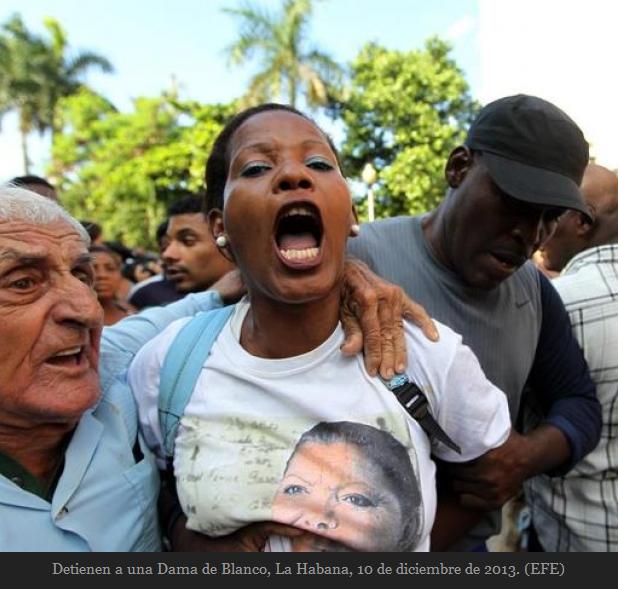 We are all too aware Cuba’s dictatorship does not possess the slightest modicum of remorse or self-reproach, so we cannot ask such a State to behave honorably. The Cuban dictatorship is not worthy of respect.  Time to stop looking in vain for something that is just not there.   Best we just resign ourselves to reality.  If anything, the serious question that begs asking is why certain governments keep close ties to our two warlord brothers.  Not easy to stomach how some apparently respectable and democratic nations accept having Cuba take on the presidency of CELAC.*

Before allowing Cuba to become a bona fide member, the proper thing would be for the UN to kick Cuba out of the Human Rights Council.  Just how on earth has it become possible for the Castro brothers to — without any trace of unease or embarrassment –  shamelessly mock the international community of nations under the auspices of the UN?

In Cuba, on Human Rights Day what the State commemorates is the opportunity to violate as many human rights as possible.  On that Day, all manner of human rights are violated in a proud and peerless display of the Regime’s totalitarian access to military and judicial might. Dozens of women from the honorable roll call of Ladies in White (Damas de Blanco) were beaten and arrested in front of people who remained silent for fear that any alliance to the voice of opposition — no matter how humane or reasonable — would spell reprisal from oppressive government forces.  Once again, people did nothing to stop the abuse and humiliation of their fellow citizens.  At the home of Antonio Rodiles — a.k.a. the SATS headquarters for open thought — Calixto Martínez, Kizzy Macías and Rodiles were all taunted and later arrested in order to contain the initiative for Human Rights meetings that openly challenge the regime and its totalitarian laws.

I am convinced and pray to God that one day soon we will be able to celebrate the Rights every human being born on this planet has the right to enjoy in order to be protected from Fascist states.  The very fascists states shaped after WWII but unknown in Cuba.

When that day dawns, we will exalt those brave enough to suffer mental and physical abuse under this regime.  And those who keep silent or feigned support to the current dictatorship will only feel shame.

Fair to say that despite the State’s hatchet men and the well-oiled machinery of repression, Human Rights Day on December 10 was still felt on the Island archipelago.

Down with Dictatorship!  Nation and Freedom!

Translator’s note: CELAC – Community of Latin American and Caribbean States.  An organization created to promote deeper intergration within the Americas.