Angel Santiesteban, 30 March 2016 — The denunciation of the violation of Ángel Santiesteban’s human rights has been accepted by the Inter-American Commission on Human Rights (IACHR). The organization has given the Castro dictatorship a three-month deadline to respond. 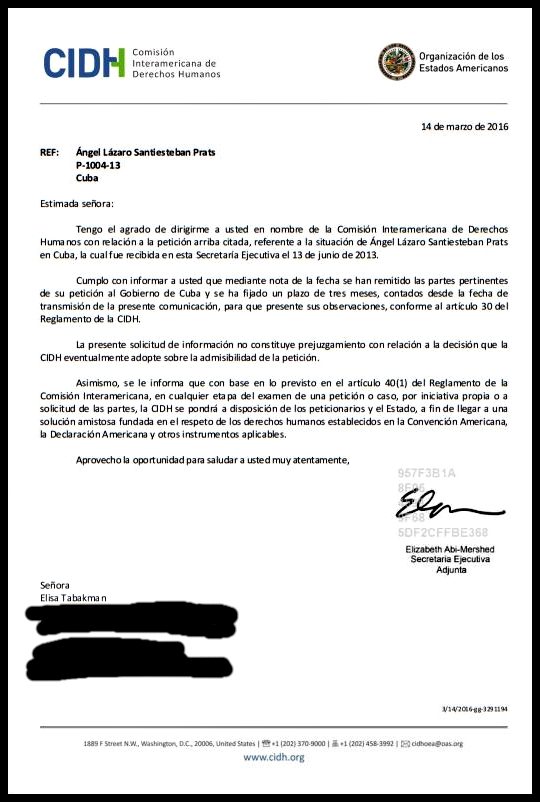 [A translation of the letter from the IACHR, addressed to Ángel Santiesteban’s editor, Elisa Tabakman, follows below.]

I have the pleasure of contacting you on behalf of the Inter-American Commission of Human Rights (IACHR) regarding the above-cited petition in reference to the situation of Ángel Lázaro Santiesteban Prats in Cuba, which was received by this Executive Secretariat on 13 June 2013.

I hereby inform you that by way of a note dated today, the parts of your petition pertinent to the Government of Cuba have been remitted and a due date of three months has been from the date of transmission of the present communication for a presentation of observations, in accordance with Article 30 of the Rules of the IACHR.

The present information request does not constitute a prejudgment regarding the decision that the IACHR will eventually make on the admissibility of this petition.

Likewise, you are informed that based on Article 40(1) of the Rules of the IACHR, at any phase of the investigation of a petition or case, by its own initiative o upon the request of the parties, the IACHR will make itself available to the petitioners and to the State, with the goal of reaching an amicable solution founded on the respect for human rights established in the American Convention, the American Declaration, and other applicable instruments.

I take this opportunity to give you my most cordial greetings,