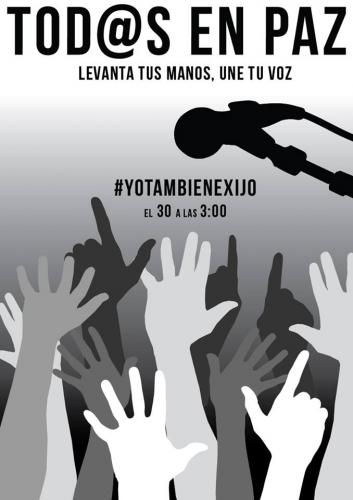 For the mere act of having been born a man, to be thinking, already implies in inalienable right to express myself freely without waiting for the permission of another man.

Because my right of freedom of assembly and association are provided for by international agreements recognized by the civilized world, and these agreements are found to be above the decision of the dictators that try to continue enslaving the mind of my people with its out of date demagoguery.

Because if a real revolution is progression, dialectical forward, 180-degree turn forward, then the retrograde breed that from the power hinders the progress of my people today doesn’t deserve anything but to call themselves counterrevolutionaries.

Because more than 50 years of monologue from an undeserved altar already was too much and today it is its turn before the jury of the people of Cuba, to the betrayed, today has arrived, finally, the offended’s turn.

For all this, I also demand:

That the Cuban government ratify and immediately and unconditionally implement the International Covenants on Civil and Political Human Rights and Economic, Social, and Cultural Rights that it left pending as of February 2008.

That the Cuban authorities officially recognize the existence and legitimacy of the Cuban opposition, and consequently call democratic elections where the entire spectrum of the plurality of thought of Cuban society is represented.

That an effective separation of powers be established. In this sense, it would be essential that the People’s Supreme court, highest authority of judicial power, stop being under the Council of State, highest authority of executive power, so that the judges of the People’s courts being affiliated with the Communist Party of Cuba would be prohibited, something that would favor their credibility in the impartial exercise of justice.

Let it consequently stop the harassment, persecution or any type of repression of any individual group that tries to express its political position publicly and peacefully, as well as stopping the arbitrary detentions of civic activists that represent a dissident proposal.

That the Communist Party of Cuba and Cuban State Security stop organizing the sad infamous acts of repudiation, which are profoundly damaging to the dignity of those that they perpetrate, as well as unequivocally noxious to the public morality; consequently those acts become considered as a body of crime by the existing Penal Code, at which moment will be sanctioned under the law as they have always been: authentic acts of vandalism, that include invasion of the home and/or aggression and danger to persons.

That it establish an appropriate legal framework that guarantees a full freedom of the press and total access and without censorship to the Internet as means for the exercise of our freedom of expression, from which all can, without fear of being punished for it, to propose a better way of changing these ruins that we inherit in that nation that we have, as the first law of the republic, the cuban worship of the full dignity of man.

For all these reasons: #YoTambiénExijo