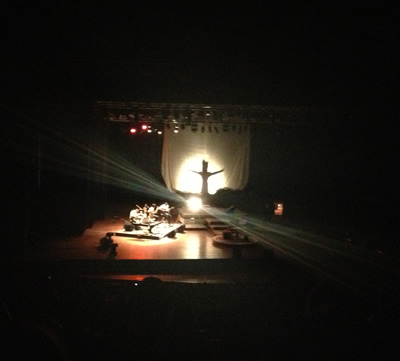 I leaned against the window carefully. The glass had a crack running through it and with each jolt it seemed likely to shatter. A few minutes, a roadway traversed by collective taxis, an arithmetic exercise: count all the people on the street who were smiling. In the first stretch, between Rancho Boyeros Avenue and the Maravillas Cinema, none. One lady was showing her teeth not for joy but because of the sun, which made her eyes squint and her lips open. A teenager in a high school uniform shouted at another. I couldn’t hear because of the engine noise, but there was no joking in his words. Coming to the Plaza de Cuatro Caminos, a couple was locked in a kiss at the corner, but there was nothing playful about it. Rather it was a carnivorous kiss, devouring, predatory. A baby in a stroller looked close to laughing, but no, it was just a yawn. Coming to Fraternity Park, I was barely able to calculate some three laughs, including one from a cop who was mocking a boy in handcuffs being shoved into a patrol car.

It’s an experiment I’ve carried out on several occasions, to see if we really are the smiling people so talked about in the stereotypes. In most cases, the number who express some level of happiness has not exceeded five in a trip varying between two to six miles. Clearly this doesn’t prove anything, unless it’s that in our daily circumstances laughter is not as abundant as they want us to believe. Still, we remain a people with a great deal of humor. But the jokes act more like the rescuing piece of driftwood that saves us from the shipwreck of depression, not as evidence of our happiness. We laugh to keep from crying, from hitting, from killing. We laugh to forget, escape, shut up. So when we see a comedy show that touches all the painful springs of our laughter, it’s as if the valves open and the whole of 10th of October Avenue starts to laugh, including the buildings, the street lamps and the traffic signals.

Last Friday something like this happened at the “De doime son los cantantes” show, presented at the Karl Marx theater by the actor Osvaldo Doimeadios. A tribute also to the best of our vernacular theater, the comedian offered magisterial interpretations and monologues. From the economic hardships, the migratory reform, the excessive controls on the self-employed, to the corruption scandals associated with the fiber optic cable, these were some of the themes that most made us roar. We laugh at our problems and our miseries, we laugh at ourselves. After the distraction ended, the audience crowded into the hot aisles to exit. Outside, Primera Street was packed in the late night. I took a bus home and leaned against the window… no one was smiling. The humor had been left in the seats and on the stage, we had returned to our sober reality.