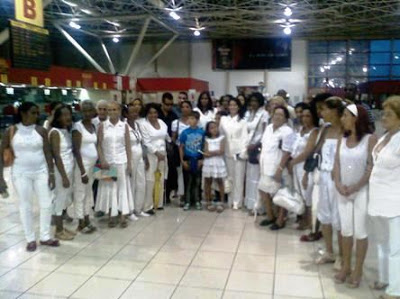 A representation of the Ladies in White movement, Human Rights defenders and a group of activists from the Cuban Independent and Democratic Party (CID), said goodbye on Sunday afternoon, April 21, to the Ladies in White Laura María Labrada Pollán and Belkis Castillo at Jose Marti Airport in Havana.

About 30 people attended the farewell of the compatriots who traveled to Belgium to participate in the ceremony for the Sakharov Prize awarded to the Ladies in White in 2005 by the European Parliament.

Before boarding the plane both women made statements to the foreign press about the reason for their trip, as well as the various demands they would make to get the attention of the international community for the human rights violations committed by the Cuban government. Among those present at this farewell was the former political prisoner Angel Moya husband of current leader and founder Berta Soler, who is also abroad.

Laura María said that she would soon be back in Cuba to continue the fight with the Ladies in White movement in the streets of the capital and with all the women over the island; she would travel only a few days to participate in the acceptance of this award which represented one of her mother’s greatest desires that the work and courage of so many women confronting tyranny would be recognized.