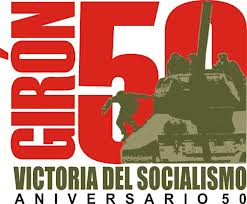 The annual carrying on over the victory of Playa Giron (Bay of Pigs) happened this fourth month, with the national media playing it down. The elections in Venezuela were the priority of the Cuban government after the physical death of Hugo Chavez and it seems that a matter of so much preoccupation and occupation, a vital matter of political survival for them, that they quietly commemorated the victory gained April 15-19 of 1961 by the then young Revolution, against the invaders.

The remains of Sara Gonzalez* must have been spinning in the stinking waters of Havana Bay this month. Her iconic song “Giron, the Vanguard,” an allegory of that military success of the nascent Cuban dictatorship, wasn’t even heard as usual in the four days of the media hammering that usually accompanies the remembrance.

Sometimes it seems that the government thinks that we are a subnormal people or that we have learning difficulties, so they must repeat to us, over and over again, the events and dates and produce multiple TV and radio programs to  repeat the events and dates over and over again and make many radio and television programs to plant the understanding in our minds over the entire year; but the more repetitions on the anniversaries. Perhaps others, like myself, noticed the government slip-up, but they chose to let us escape, although just this one time, from the persistent official harassment, the manipulation of consciousness that historically reigns over the minds of our subjected people. What a relief!

*Translator’s note: Sara Gonzalez Gomes (~1950-12012) was a Cuban singer songwriter who was part of the Nuevo Trova with figures such as Silvio Roriguez and Pablo Milanes.