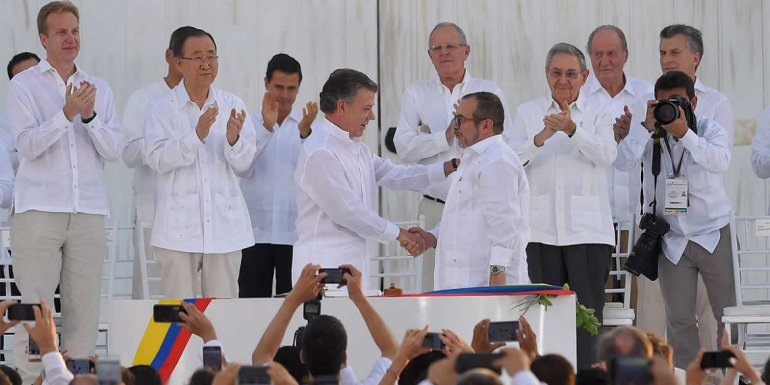 Juan Juan Almeida, 17 March 2017 — From the very moment it gained power, the Cuban regime has devoted precious resources to exporting its ideology and cultivating followers. Overseas military conflicts as distant as those in Africa in the late 1970s and the guerrilla wars in Central America in the 1970s and 1980s relied on Cuban logistics and personnel. And just as it expressed solidarity by sending professionals from multiple disciplines to so-called Third World countries, so too has it brought professionals to the island for training throughout the years, generating a wellspring of sympathizers who feel a huge debt of gratitude.

As part of this successful experiment, there is now a new Cuban “solidarity” contribution to the peace process in Colombia. It was no coincidence that the island’s capital was the setting for the signing of the peace accord.

The Castro regime has instructed its ambassador in Bogota to announce that it is awarding up to one thousand scholarships to the demobilized members of the FARC guerrilla group and the victims of its armed conflict to study medicine in Cuba.

The communiqué notes that the 200 scholarships to be awarded annually over a five-year period — 100 for FARC soldiers and 100 for its executive council — will be Cuba’s contribution to the implementation of the peace accords reached in Havana and to a lasting peace in Columbia. Students may access their scholarships beginning in the 2017-2018 school year. The Cuban embassy will submit a document to the Columbian government and the FARC outlining the details which, even at the last minute, was still being finalized by Cuban authorities.

This “goodwill gesture” on Cuba’s part — a followup to the final resolution of the conflict — seems more about publicity than plausibility. The war went on for so many years that any attempt to avoid death and violence is noteworthy. Cuba wants not only to promote itself as a champion of peace in the region but also to profit from the naivety of some democratic voices who applaud any action that might help end the long conflict. But above all — and this is very important — it wants to influence the underdogs, the FARC, with aid and support in order to achieve a fundamental objective: to mask their image as crude terrorists by treating them as a legitimate political organization.

Let’s not forget that a significant portion of the two billion dollars that the FARC made from kidnapping and drug trafficking in its own country is now safely stashed away. Having been well laundered, it is used to buy sophisticated, modern equipment for humanitarian purposes at CIMEQ and the Cira Garcia Clinic.* Or it has been invested as Cuba’s contribution to joint venture projects that the government has with business consortiums and large hotel chains operating both inside and outside the country.

Cuban ambassador José Luis Ponce publicly announced the program alongside members of the CSIVI, the commission which oversees the implementation and verification of the peace accord. He addressed his remarks to FARC secretariat member Iván Márquez, who used his Twitter account to stress that “this contribution by Cuba to the implementation of the Havana Agreement and to the postwar period in Colombia is a pure humanitarian gesture.”

Curiously, Piedad Córdoba — a Columbian attorney, politician and leader of the Citizen Power XXI Century movement — used her own Twitter account minutes later to state, “In spite of being under embargo, Cuba not only has the best medicine in the world, it is also among the most supportive.”

Such Twitter coincidences are not exactly a fitting prelude to support for the end of the conflict. Why don’t any of the parties involved mention that, in addition to the one-thousand scholarships to study medicine, the Cuban government is offering as many as five-hundred scholarships to study journalism on the island?

Cuba is well-known for the high-quality training it provides to its health care professionals as well as for the benefits it receives from its program of exporting doctors.

This lab coat diplomacy, which includes training foreigners on the island to be physicians, currently generates more income than tourism, family remittances, nickel or sugar.

Besides operating a well-oiled financial machine, the Cuban government’s main goal is to create an army of grateful people, spread across the globe, who are influential in the social circles. They remain committed and invisible, ever ready to take immediate action in support of medicine and the Cuban revolution.

Let us take this to the exercise of journalism, taking into account the fluidity, or freedom of information that exists today in the world, where even some democratic governments are becoming more and more controlling. A host of indoctrinated journalists is a weapon of significant influence and an effective tool for spreading ideas and ideologies.

*Translator’s note: The hospital and clinic mentioned here were established to treat foreigners and foreign dignitaries as well as members of the Cuban government, the military and their families. Their facilities, equipment and provisions are known for being of a much higher quality than those for ordinary Cubans.