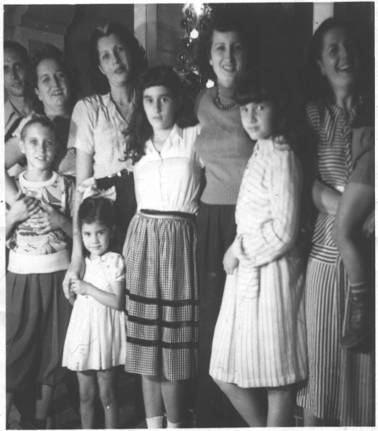 Before the year 1959, I had a great family: grandparents, fathers, mothers, uncles, aunts, cousins, godmothers, godfathers as well as their partners.  We formed a clan, united by love and the daily routine; where our very close and beloved friends were part of it and the family ties were blurred, to the point where it was hard to distinguish if the same blood ran through our veins.

At the beginning, the very beginning of that old year, the contagious happiness inundated all Cuban homes: “The tyrant had left”; but this happiness would last a short time.

Quickly the first “Revolutionary laws” were implemented and behind this hardship some of the familiar faces started disappearing; then some more.  That happiness was replaced by uncertainty, followed by sadness and later on by fear.  We, the youngest wouldn’t realize what was happening until we stopped seeing the faces of our closest friends.  Our neighborhood started turning sad, then the school, then the house, the city, the country.

Everyday we would hear of someone very close leaving the country, abandoning us.  Who knows when we would see each other, if it would even happen, since the radio and television media said the opposite:  “The traitors and unpatriotic that leave the country will never come back.”  For me, a teenager, who was raised in a world of harmony and love, this represented very harsh words, very blunt, immeasurable.

My most dear friends started disappearing as if by magic; but it was truly because of “the magician”.  Some left with identity tags hanging around their necks, leaving for the unknown, they were sent by their own parents with the purpose of “saving them from what was to come”; they were the Operation Peter Pan* kids.  Between hugs and tears we would say goodbye, we would exchange small keepsakes, thinking that we would never see each other, it was tremendously painful.

I still remember with great pain, the day that one of my cousins and his wife left: she took in her womb her first-born, for whom I had embroidered many diapers with the extreme love of someone who expects their first nephew; I met him 38 years later when the cultural exchange trips were re-established, because with the passage of time, among prohibitions and avatars I had become a an artist and for the first time I was able to go to an exposition outside of the captive island.

Then, little by little, I started to cultivate new friendships, I got married, had kids.  One day, my kids left looking for freedom and new horizons.  They settled in different parts of the world, and I had granddaughters that I couldn’t enjoy.  I met those years later, after I had missed all their baby delight, their first words and their first steps.  Also my new friends were leaving too.

Upon my return from a trip, in which I was able to hold an exhibition “outside” I contacted my children and I confirmed with extreme pain all the big and small things that we had missed sharing in this long and grueling way; but the most painful of all, without any doubt has been this extreme family fragmentation.

*Translator’s note: Operation Peter Pan (Pedro Pan), was a program where unaccompanied minors were sent to the United States by their families, who generally hoped to follow them later.  The children were raised by relatives or in foster homes; many were ultimately reunited with their families in the US, but for many others their families were never able to join them.