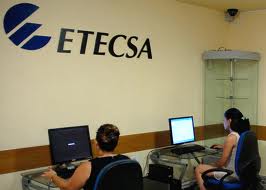 Some 0.004% of the Cuban population will connect to the Web.

Starting on June 4, 2013, 472 people (maximum) will be the daily human traffic going to a NAUTA Internet cafe, approximately 0.004% of the Cuban population.

The state-owned telephone company, ETECSA, is expanding its Internet services to the “population” — 472 is the maximum that can be served daily. The navigation speed will be 2 Mbps (megabytes per second) which is equivalent to 2 mil, 48 Kbps (Kilobytes per second), a speed faster than the 50 Kb on telephone connections and better than the satellite connections can reach speeds on the Island of up to 300 Kbps.

According to the article published in the newspaper Granma, 118 rooms will be opened, more than the 99 previously. The internet rooms will be identified with the NAUTA stamp with which ETECSA is commercializing its navigation services in the country.

All this has arisen with of the activation of the fiber optic cable obtained from the Cuba-Venezuela economic agreements. Which brings a space of freedom to the “supervised” world wide web. Where the majority of users will be human rights defenders on the Island. Thus the government is certain to control the population’s use of this technology.

One measure that has come to light is the prohibition on voice traffic. But it reflects the free navigation as well as the ups and downloads with equal status. The cost will drop to 3 CUC (over $3 U.S.) equivalent to 75 Cuban pesos.

The Cuban population has unreasonably delayed access to technology, where all these technological changes itself bring social blockade. The aging of the population will be a critical factor, as older people will show little interest to the coming changes as reflected the inability of people to navigate cyberspace.