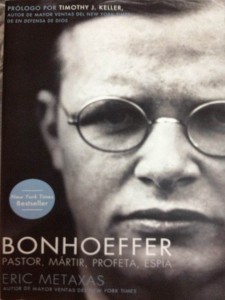 If the only benefit of my recent trip to the United States had been to find and bring back to Cuba with me the biography Bonhoeffer: Pastor, Martyr, Prophet, Spy by Eric Metaxas, it would have been worth it. As I’ve always declared, that martyr of the German church is an inspiration for my life, and thus for this “Confessing Cuban” blog.

During the recent days of detention and house arrest accompanying the shameful repressive crackdown (as we should always characterize it when mentioning the Second CELAC Summit in Havana), the work of Metaxas was my bedside book. A text like this, regardless of my circumstances, reaffirms my faith and my convictions of social justice emanating from the Bible.

In my recent reading (since several more are required) of chapter seven, “Bonhoeffer in America,” recounting the pastor’s nearly yearlong stay (1930-31) in that great country, I identified strongly because of my similar experience during the four months I just lived through.

Coincidentally we arrived in the States on almost the same day of the same month (he on the 12th, I on the 11th of September), but he ended his journey in New York on June 17 (my birthday) to return three days later to Germany. During that time the place Bonhoeffer chose to spend Christmas was not in the icy north but in our tropical Havana, where he jumped at the chance to preach to a German congregation, from the text that narrates the death of Moses on Mount Nebo.

Of all the theology Bonhoeffer had contact with in the the United States, that which most influenced him was what he encountered through his friend Albert Franklin Fisher, an African-American raised in Alabama, with whom he attended the Abyssinian Baptist Church in Harlem, where he was impressed on meeting the preacher Dr. Adam Clayton Powell.

According to Metaxas “Powell combined the fire of a revivalist preacher with great intellect and social vision. He actively fought racism and did not shrink from talking about the saving power of Jesus Christ … he believed that without both you had nothing, and with both, you had it all. When you combine the two, and only then, God was present in the equation and life flowed outward.”

Bonhoeffer returned to the United States on June 12, 1939, but was in New York for only twenty-six days, during which he debated whether to take refuge there or return to Germany to confront its harsh reality, finally settling on the latter. Chapter 21, “The Big Decision,” based on the events of his life in 1939, describes this episode.

Although this was a short trip short compared to the first, Bonhoeffer wrote, while in the middle of the Atlantic Ocean on his return: “The visit has come to an end. I’m glad to have been here and I’m content to return home. I may have learned more in this month than in the entire year I spent here nine years ago; at least I gained some insight for all future decisions. It is likely that this visit has had a great effect on me.”

I agree with the Wall Street Journal review of this gem of a biography: “In Bonhoeffer, Mr. Metaxas reminds us that there are forms of religion—respectable, domesticated, timid—that may end up doing the devil’s work for him.” This statement brought to mind the recent words from the authoritative voice of Dr. Marcos Antonio Ramos, author of the largest volume ever written on Protestantism in Cuba, in an interview conducted by martinoticias.com, about the thirty questions I was going to raise during my trip to the United States. The historian stated that only the voices of individual pastors or priests have been raised to challenge the regime, but not a single organized religious denomination in Cuba has dared to do so.

To our historic regret, the words of Marcos Antonio combine with those of the Wall Street Journal on Metaxas’s Bonhoeffer, to indict us, the Cuban church in general. The Journal’s words seem to describe us literally. As one of the officers of the political police active in these days of repression said: “The church in Cuba does not interest me.” As if to say “It’s not a problem for us. It’s so full of competing interests. It’s a great useful idiot.”

Christianity Today also commented on Metaxas’s Bonhoeffer, which it described as solid and masterly, saying: “During a harrowing time when many churches adopted the Nazi ideology and others buckled under pressure from the government, Bonhoeffer remained firm, if sometimes alone.” Bonhoeffer’s life and also his practical theology constitute an example to any Christian in Cuba who decides to represent the values of the Kingdom in the midst of the carnage that reigns as a result of over fifty years of misrule.