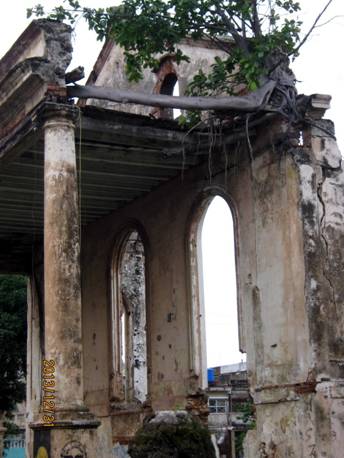 My friend emigrated 20 years ago. “She left without saying goodbye,” as the lyrics of a popular song go, but I understood. She was always saying to me, “This country is being swallowed up by laziness.”

Much to my surprise, the telephone rang on the night of the 25th. It was her sister, who said to me, “Guess who I have here that wants to speak with you?” Immediately, her name rolled off my tongue. I was truly shocked.

Yesterday, the 31st of December, we arranged to meet at a private restaurant in Vedado, one of the few open that day. My friend is very absent-minded and left me waiting for over two hours. During that time a terrible, ominous downpour fell from the north, not the one I wanted but from the north nonetheless. Much heat, rain and then a wonderful breeze.

To get to the restaurant, we passed the ruins of what was once the historic and iconic Hotel Trotcha, where Generalissimo Máximo Gómez stayed before settling in the Quinta de los Molinos. There I took photos of my friend and said, “You see, for the price of a ticket to Havana you can feel like you made a stop in Greece to visit ancient ruins.”

Since the only private restaurant open is charming but very expensive, we had a very frugal lunch. I was careful with my friend’s money; she is not a “millionaire,” as many people from here assume of people from there. All I ordered was an appetizer, a soft drink and an ice cream. She followed my example and did the same.

A longing for the good times led our steps towards the Hotel Riviera. We were both very impressed at its current state. Our excitement did not allow us to see details that we noticed upon leaving: leaks, stains and peeling furniture. There was no one in the lobby or in the cafe. It looked like a beautiful desert, with only a few people enjoying the pool. This hotel is managed by the Cuban company Gran Caribe.

From there we went to the Melía Cohiba. It was then that I told her, “This hotel was built to highlight the architectural beauty of the Riviera.” The Melía was busy and cheerful. All the fountains in the lobby were busy, a good number of tourists were coming and going, and a huge Christmas tree was there to welcome you. The differences were striking, a result of good maintenance. It is managed by the Spanish hotel chain, which keeps it in top condition.

We continued our walk to Linea Street so my friend could catch a cab, a very difficult task since all the “tarecones” from Playa are usually full. Finally, one stopped.

“I will take you but you have to give me a ’fula’ (normally ten pesos),” the driver said.

“O.K.” she said and we took our leave, giving each other one last hug. I crossed the busy and crowded street, and managed to catch the #27 bus (it almost never passes by), which was practically empty. I arrived home with my feet aching but happy to have had this strange but wonderful matinée and end-of-year outing.