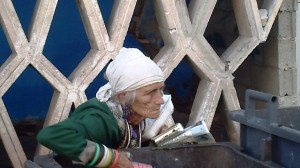 LA HABANA, Cuba, October, www.cubanet.org – The authorities have assured us that the aging of the population and the declining birth rate makes us the equal of the developed countries. What cynicism! The latest Population and Housing Census only demonstrates the profound socioeconomic crisis has converted the existence of every Cuban into a difficult ordeal.

The collapse of the totalitarian statist model, the low purchasing power, the high cost of living and the housing crisis, dissuade young couples from having children.

There are many young people who refrain from starting a family because they put all their hopes in leaving the country. In finding, abroad, the personal realization that is closed to them in Cuba. 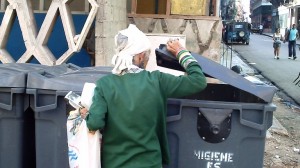 There are more than two million compatriots scattered throughout the world.

But the hardest hit by our crisis, are the elderly. The weakness of the Cuban economy can not guarantee quality of life for our old people, who after working for decades, suffer poverty level pensions and the lack of social protections.

It’s shocking to see our elderly and disables thrown into the informal economy, or begging, while the top leadership doesn’t change its discourse of being the paternalistic supreme benefactor. 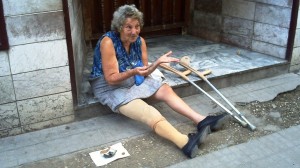 The frustration comes through in every testimony: Arturo Ponciano, 79, retired from construction thirteen years ago. Speaking haltingly he wonders when he will be able to relax if not in his grave. “So much hard work, so many shocking works, internationalist missions, to have to keep struggling in the street, selling candy, fighting the insatiable inspectors for the needs of the people.”

Aurora, 71, from Havana, says that she still felt strong when she retired from the tobacco factory after 38 years of work… “but I couldn’t take the pressure and the persecution of the bosses to prevent the stealing of materials, or the aggressive behavior of the young people (so different from what we were like).” Aurora feels frustrated that what she earns in retirement isn’t even enough to buy a sweet treat for her grandchildren.

After calming down from her panic, thinking I was an inspector coming to fine her or take her money, Nina, 74, said that she is exhausted every morning after walking miles in the sun as a roaming seller. “If I don’t do it, I don’t know how I’m going to live. As long as I have the strength I will keep pushing the cart of candy, popcorn and “chicharritas” (friend banana chips) that has become so heavy by the afternoon. 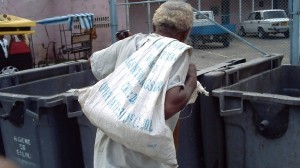 Berta Lina, 69, a retired clerk, says that the government talks a lot but in reality abandons old people to their fate after working for so many years, “the police produce nothing, they earn much more than others and they don’t even pay bus fares, the retired don’t even get a discount on that.”

“My younger sister has lived in Belgium for many years and people can’t even imagine the benefits enjoyed by the elderly in that country …  And I, working in private homes, earned in a day more than they pay me in retirement.”

Manolo, a retired teacher and widower of 81, said that his two children are very well positioned occupationally and his daughter living in the United States doesn’t hesitate to help. Manolo says, “My luck doesn’t keep me from recognizing how hard it is to see so many elderly in poverty or trying to sell what they can to survive… I came back from my visit to the United States to see my grandchildren, but they can say what they want, over there you don’t see any old people in this lamentable condition.”

Wilfredo, a retired lieutenant colonel, 73, recognizes that, “It is very hard at the end of the day to accept that this Revolution to which gave his entire life and his efforts proved to be a lie and a failure… Many old people who are still suffering the consequences of that failure refuse to accept the harsh reality.”

There are old people who, at a quick glance, one can see that their poor physical condition is premature. At this point neither the family nor the government seems prepared to face the challenges of such a broad segment of the population entering old age.

Apparently the Cuban authorities are more concerned with the status and socio-economic needs of their sister ALBA countries than with the fate of the elderly of the island. For us, an ever growing share of Cubans are approaching old age that we aren’t prepared for, if there isn’t a miracle, they will suffer more down the road.