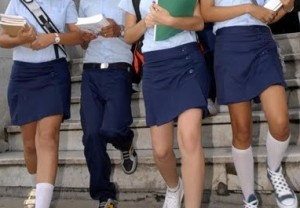 HAVANA, Cuba , September 4, 2013, www.cubanet.org – Two police cars parked at the entrance to a high school. From one of them a man in civilian dress got out, and with long strides entered the school. Uniformed police also got out of the cars, but they remained outside the fence. The civilian went straight to the office of the director, who barely had time to react when the newcomer started dragging him, kicking, taking him almost to the center of the schoolyard.

The students witnessed the spectacle as if it were a Roman circus or a “pankration” fight. Most of them cheering the man and some recognizing him as the father of one of the girls at the school. Then, beating the director with a piece of wood until he was unconscious, the man called the police. They came in, handcuffed the defenseless individual on the ground, and carried him to the police car.

It was learned that the director was having relations with the daughter of the aggressor, an 8th grade student, and had been since she was in 7th grade. The romance was a secret until her girlfriend, who knew everything, committed an indiscretion. The offended father, with very good relations with the People’s Revolutionary Police (PNR), gathered all the evidence. The girl confessed. Furthermore, it was learned that the director was participating in a network of falsifying and selling school records.

Similar events are common in the schools of Cuba. They don’t always come to light because the students themselves cover for the teacher, or director, either out of their own interests or fear.

Any Cuban who spent part of his youth in the education system of boarding schools in the countryside, heard anecdotes of students being teachers’ lovers. Sexual relations between minors and adults, who were supposed to, under the law, be the children’s guardians. This writer saw, on more than one occasion, students involved with teachers in exchange for a higher grade on an exam, or to avoid having to repeat a year. The phenomenon was not unique to girls. Boys also offered sexual favors to male teachers in exchange for the same things.

Now the phenomenon is spreading. Prostitution is exercised between students themselves, under the auspicious cloak of festivals called “downloads.” In this mode the beneficiaries are the more affluent kids. It’s known for a boyfriend to lend his girlfriend to a classmate in exchange for money or other equivalent material goods. If the matter goes further, and it gets into “experimenting,” the boyfriend also gets into the bed. Bisexuality, more than a possible and legitimate tendency, is now a carte blanche to earn money.

Virginity is a burden

For girls, virginity is a burden that is removed as soon as they’re over twelve. A growing number of girls become sexually active even earlier. For guys, someone who is more than twenty is considered an “old man.” The fast and rushed “burning of stages” is part of the race for survival. The sex trade constantly asks for “fresh meat.” Moreover, many families raise their girls as “animals for the competition.” In blunt terms, they should be ready to find themselves a “daddy with little money.”

For boys, the job of “chulo” — pimp — is practiced within the school itself. It’s a kind of training that is later completed in the street. The school no longer instructs the “New Man.” Now it is a transit point for boys and girls whose sexuality emerges marked by cynicism, consequences and a reflection of a society sick to its very roots.