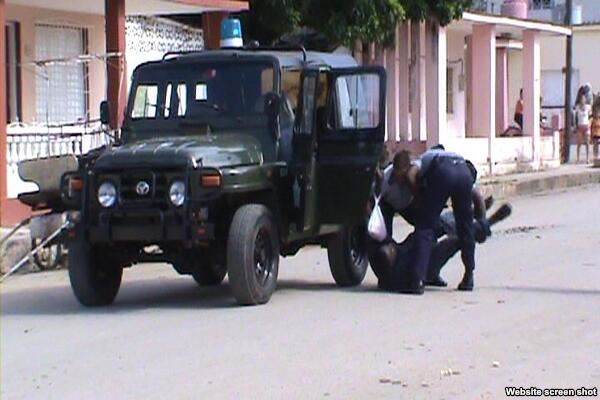 Once again, the subject of human rights is polarizing Cuban society.  Many would agree that keeping the topic center stage is an especially meaningful and noteworthy endeavour.

To be fair, we must acknowledge that the Cuban government deploys more than 40,000 doctors, nurses and teachers who volunteer time and expertise in more than 100 countries around the world.  Faraway patients who have lost both the will and the physical ability to smile get beaming Cubans to offer comfort and relief.  But in Cuba, the opposite is true: Basic sanitation is lacking to the extent that some people actually die from otherwise totally preventable illnesses.

Like any other, Cuban society longs for open rights to healthful rather than unhealthful care and wants to experience life in a seamless universe where societal freedoms coalesce with justice.

Good or bad, I am comforted by Article 8 of Cuba’s current Constitution.                I quote: “The State recognizes, respects and guarantees freedom of religion.  The Cuban Republic will enforce the separation between church and state.  Any creed or religion shall be granted the same rights.”

A dismal affair to realize how the Department of Religious Affairs (instituted and overseen by the Communist Party’s Central Committee since 1985) which acts to regulate, control and authorize the existence and/or activities of any current or future religious organization in Cuba, is able to violate the freedom of religion decree and many other legal edicts with total and complete impunity.

But to prove lack of religious freedom in Cuba clearly exists, underground and  timeworn arguments and typically heated debates siding one way or the other seem pointless.  Suffice it to say that what is everywhere missing are basic freedoms that guarantee citizens will not be abused or discriminated against by their own government.

It seems shameful to me discuss how island family rights are said to endure in Cuba when many who are allowed to leave — under the auspices of expatriate charity — unfortunately end up barred from ever returning.  And what pitiful freedom can we speak of when blacks who once rose from their barracks to stake their claim on liberty are today forced to endure marginalized lives in filthy ghettos?

In Cuba, another nearly worn out topic is how apparently irresponsible — or at least misguided — government practices are the root cause of our bottomless and spiraling deficit.  For starters, emigration from Cuba increased while the nation’s birth rate decreased.  Next, our aging population has been systematically depleting whatever small pension system existed so that zero funds are available to cover the tab of average retirement.  That said, just what rights to gaining social security are we talking about?

Cuban television shows are mostly about how average Cuban people face everyday joys and sorrows and the unexpected good or bad twists of fate life throws our way.  What is never unveiled, however, are the intense days of suffering borne by those who are jailed helter-skelter for the sole crime of remembering that in 1950, the UN General Assembly proclaimed December 10 as a day when all member nations and special organizations would reflect on human rights as the standard for all people and all nations to achieve.