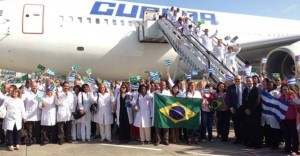 According to the Official Journal of the European Union, the Brazilian government decided to triple the number of Cuban collaborators in its program of popular health “More Doctors.” And to cover the increase of the Cuban medical contingent in Brazil, Dilma Rousseff updated the contract it has with the Pan American Health Organization (PAHO/WHO), bringing to 973.94 million reals ($ 415 million dollars) as the resources for this expansion for the next six months.

What is blatantly obvious on the Brazilian news is that the Cuban doctors expected to arrive in Brazil, are those who — given the unstable and turbulent situation facing Caracas — are preparing to flee Venezuela.