People crowd together in the suffocating heat, some are holding signs with names printed on them. The flight from Madrid just landed at José Martí International Airport, bringing tourists and many nationals now living in Spain. Each person must wait forty minutes to an hour — at least — before finally passing through the exit door. Havana is one of the world’s slowest airports, the worst lit, and with the fewest services for the traveler.

In a country that receives almost three million tourists a year, updating its airport facilities is vital for the economy. If these places don’t meet international standards, it’s unlikely that the island — in the short or medium term — can play host to more visitors.

Aware of its major shortcomings, ECASA (Cuban Airports and Aeronautical Services S.A.) has begun a process of remodeling some of its arrival and departure lounges, but the problem requires more than adjustments and redesign. Its principal limitations are not only material, but also its excessive controls, the lack of comfort, and the attitudes of its employees.

Alina has arrived at the Havana airport three hours early, but it may not be enough. She can check in only at the airline counter, as there are no machines to perform the procedures independently. This limitation lengthens the lines, slows the whole process of obtaining a boarding pass, and feeds the image of an always crowded lounge that characterizes José Martí Airport.

A frequent traveler to Spain, thanks to her new EU passport, Alina has come prepared for a cramped and awkward process. She flies through Terminal 2 because Terminal 3 — larger and more modern — is being remodeled and recently experienced a fire. In her bag she carries a snack made at home, because she knows the prices there are stratospheric and the offerings are very limited.

Poor signage completes the picture. For ten minutes the frustrated customer looks for a bathroom but the directional signs are scarce and not very visible. Few of the ceiling lights are on, which makes the various areas of the lounge dark. Still, every passenger must pay the airport tax. In the line to hand over 25 convertible pesos ($28 US), one hears the tourists complaining about the tenuous relationship between the price and the quality of the facilities. Cuban passengers, however, remain silent, not wanting to cause problems for themselves just when they’re about to leave the island.

Without a Wi-Fi network to access the Internet, any modern airport falls several points on the scale of quality. With regards to communication, no embarkation point in Cuba is competitive, not even Varadero. The few public phones and the lack of a wireless network diminish the chances to communicate. To this is added the TVs buzzing away with their tired tourist announcements or overly ideological programs like Cubavision’s Roundtable. Nor is there a stand selling magazines or newspapers, just some souvenir kiosks where they sell the works of Ernesto Guevara and the speeches of Fidel Castro.

Alina is also prepared to avoid boredom while waiting, and has brought some headphones to listen to music on her phone. She waits at the exit doors — there are only two: A and B — until an employee shouts out that her flight is already checking in.

Arrivals and the collision with reality 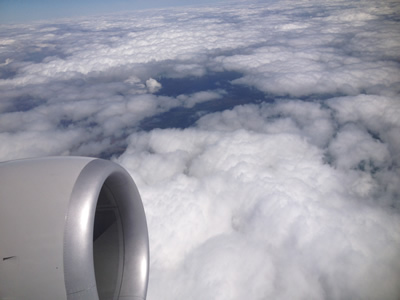 Humberto arrives after a trip to the United States. This was his first trip abroad, so he’s still stunned by the size of the Miami airport. On the plane back to Cuba he’s filled out the Customs form and in his pocket he has a copy of the boarding pass he got at the exit. He joins the long line for immigration and next will have to answer a brief medical questionnaire which he will also have to sign. A few steps away the luggage waits, the slowest point in the entry to Cuban territory. Every suitcase will be put through a scanner to investigate its contents.

After analyzing each bag or suitcase, they will attach “markers” to those that need to be inspected. A small red strip tied to the handle may mean it contains some home appliance or computer. If instead, it contains an external hard disk, then they write some initials on the paper strip that identifies the flight. There is no way to avoid this process. The customs officers are trained to keep out a long list of objects.

Humberto’s granddaughters, born in Coral Gables, have given him a laptop and a smartphone. So he must go to the table where they open his suitcase and minutely search everything. They take the computer to an office, where they probably inspect its files or make a copy of them. He’s already waited an hour and a half since the plane touched down and will probably wait a little longer.

While they search his belonging they tell him he can’t make calls on his cellphone. “Welcome to Cuba,” he tells himself when an officer asks what those “bullet-shaped” pressed cotton things are. “Tampons for my daughter,” he responds grumpily.

Two hours after arriving in his own country, Humberto passes through the gate in Terminal 2. At the same time, Alina is already seated on her flight to cross the Atlantic. Looking out the window she whispers, “Goodbye Havana airport, I hope I don’t see you for a long time!”