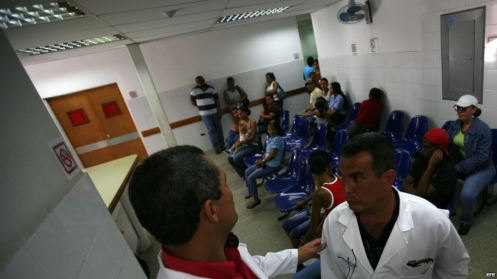 Juan Juan Almeida, 23 July 2017 — The Cuban government has put in place emergency procedures to deal with the onslaught of widespread protests in Venezuela, which are intended to halt plans for elections to the Constituent Assembly on July 30.

According to information obtained by Martí Noticias, officials at Cuba’s Ministry of Public Health (MINSAP) issued a memorandum to the heads of all medical missions in Venezuela on July 10.

The document was issued after several hours of meetings involving high-level government officials as well as the leaders of the Communist Party, the Council of State, the Commission for Defense and National Security and MINSAP according to anonymous sources from within the medical community.

The guidelines highlight the degree of concern Cuban leaders have over events that could be triggered in Venezuela, which has undergone more than one hundred days of street protests and growing tensions within the nation’s institutions.

The memorandum stresses the need to carry out “security meaures” at Comprehensive Diagnostic Centers (CDIs), which were established in 2003 to ensure emergency medical care and greater access to health services for the population. Approximately six-hundred CDIs are currently in operation throughout the country.

The directive also instructs all personnel to remain on duty from July 29 to July 30 at CDI facilities, which will be under the protection of forces from the Venezuelan National Guard.

CDIs have recently been the targets of aggression by demonstrators, and Cuban medical personnel, who are seen by some as agents of propaganda for the Venezuelan regime, have received threats.

Below is the text of the MINSAP memorandum obtained by Martí Noticias:

Upon orders from our country’s most senior leaders, you are being informed of preventive measures to be carried out from July 27 to August 3, a time period coinciding with elections for National Constituent Assembly on July 30.

1. Medical mission workers must be prepared to make travel arrangements with Cubana de Aviación, which has scheduled extra flights from July 21 to 25.

2. It is essential that security measures be put in place at every CDI. Administrative Guards must be reinforced.

3. For the time being, surgical procedures scheduled for this period are postponed.

4. Preparing a schedule of blood donations for July 23, 24 and 25 is of the highest priority. (Members of the Young Communist League and the Cuban Communist Party.)

5. Every CDI must set up a command post and report any incidents that occur in its populated area every two hours.

6. Protection for every CDI has been coordinated with the Venezuelan National Guard.

7. All personnel must remain at their CDIs from Saturdy, July 9, until Monday, July 31, before they may return to their homes.

8. It is extremely important to educate the public on the political and ideological importance of these elections.

9. Instructions were given to every head-of-mission and legal affairs officer during the last audio conference.

10. Perform and provide evidence (in photos) of a political act in commemoration of the events of July 26.