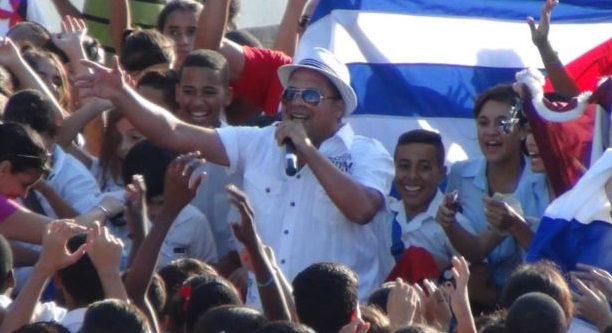 The Cuban musicians who sell their soul to the dictatorship

What was always everyday, the times of freedom reject. This happens in the country’s culture. A great share of Cuban artists have always allowed themselves to be used for political purposes. They never asked why or for what. They only agreed to hold their concerts, regardless what the real purpose of the alleged cultural activity would be.

Until the 90s or so, when they were interviewed (it also happened with athletes), they made clear their support for and gratefulness “to the Revolution,” but above all “to the Maximum Leader Fidel Castro.” The discourse of the creators was changing, and they no longer expressed such recognition, and dedicated their achievements to “the Cuban people and my family.”

The money they earned in the international market, which until then it was heresy to save it, even in a bank account abroad, they failed to surrender to government coffers, not to say, to confiscate, as they did with every right they seized. Then cynicism made its way into cultural society: it began to take on one side and the other no matter where it came from. The important thing was to survive.

Despite the freedoms, today they continue to exercise their artistic functions in the same way. They do not mind being used and programmed in the discredited “anti-imperialist Plaza,” “Plaza of the Revolution”, and whatever political act they perform in. The important thing is to be on the official list and are allowed to exercise their art, keep their savings earned on their trips and buy luxury cars (the blackmail of the famous letters (the permission to buy cars) signed by the Ministry of Culture).

On 10 December, the world’s day of celebrating Human Rights, in this case the group Arnaldo y su Talisman, was summoned to a podium in front of the house of the dissident Antonio Rodiles, where an International Meeting on culture and free opinions was going to take place where they would exchange experiences in the totalitarian system. The great horror was the use of Young Pioneers, children who witnessed the repression exercised by the regime’s henchmen.

I think that after the many reasons for the musicians to refuse, this use of children was a strong motive to refuse to be used as the court jester. We know that the artist, having been turned into a small business owner, who has opened private restaurants, and like the popular phrase says, “without the rope, you won’t enjoy the pleasures.”

The truth is that now, with good reason, the invitation to take place these days is questioned on American soil. You can not be part of the oppression and sit down to eat with the opposition. This cynicism as a national sport is intolerable. Honestly, it’s better to play music for the family or starve to death, than to be, in addition to being false, a lapdog for the dictatorship.