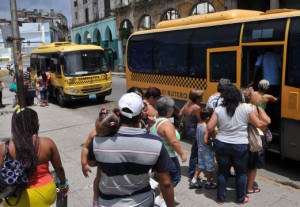 HAVANA, Cuba, August, www.cubanet.org — A very brief stop at a Havana park, El Curita (at the corner of Reina and Galiano streets), provides enough time to gauge the opinions of riders of the new public transport cooperative that serves the Havana-Boyeros-Santiago de las Vegas corridor, among the most populous in the capital. In general the consensus is that the fleet of small buses that serve this route were operating better before the switch to cooperative management even though, to much dismay, there has been no subsequent reduction in fare.

Since these buses were managed directly by the state before being taken over by the cooperative, we can already compare how good service was just a short time ago versus how bad it is today.

In Artemesia, one of the other provinces chosen as a test site for cooperative management of public transport, the flood of complaints from riders attracted the attention of the independent press. Meanwhile, the cooperative members themselves, who have been on the job barely a month, cite basic shortages (they rent rather than own their vehicles and do not have access to wholesale markets) as justification for the poor service and changes in ticket prices. 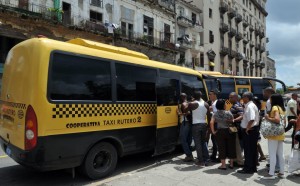 Cuba’s bigwigs believe these “new” cooperatives will provide the magic formula for completing the latest phase of their totalitarian dictatorship without embarrassment.

Looking at it from the standpoint of the world’s fatuous leftists — which is to say as a means for creating new social and economic relationships based on equality, mutual aid and solidarity — the cooperative movement must seem like manna from heaven. The hope is that it will revitalize the regime’s goal of being able to remain masters of all they surmise while simultaneously making it look as though they are seeking innovative ways of raising efficiency and productivity through a clever process of economic decentralization.

Anyone feeling bewildered by the avalanche of prohibitions and assaults with which the regime harasses the self-employed —  taking place just at the moment when many had hoped it would support and even promote their activities — might well find their confusion summed up in one word: cooperatives. The bigwigs have realized that they need not run of risk of privatization (even on a small scale), or even of small business development, which one way or another always leads to free thinking and independence.

By creating cooperatives, the bigwigs hope to make everyone believe (to use another well-worn phrase from Lampedusa) that things are changing even as everything remains the same. And so naively convinced are they that their plan is working that they feel they have the luxury of dismissing and marginalizing the self-employed — the only group that, for better or worse, was proving capable of pulling their chestnuts out of the fire.

Like the cries of a dying man, they are now publicizing, as they typically do, the existence of 124 cooperatives which have been operating since July 1 in sectors such as transport, construction, trash collection and farmers’ markets. 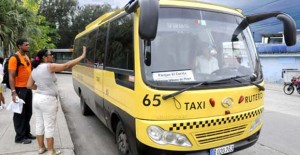 Of course, the project is part of the charming “updating of the economic model,” which has been summed up in black and white and embalmed in what is known as the Guidelines of the Sixth Congress of the Cuban Communist Party. One of its chief promoters is Grisel Tristá, whose position carries the mile-long title Chief of the Group for Corporate Perfection of the Permanent Commission for Implementation and Development. She has charmingly and quite literally stated that cooperatives “allow the state to divest itself of responsibilities that are not of transcendental importance to economic development.”

However, another expert — the president of the Society of Cooperatives of the National Association Cuban Accountants and Economists, Alberto Rivera — was talking no less charmingly about the need to train the public to understand that the promotion of these cooperatives represents a deceptive hoax. Rivera believes they were intended to serve somewhat like spare tires and were given only a passive, short-term role. True cooperatives (even as perceived by the world’s leftists) would be fundamentally incompatible with the bureaucratic, anti-democratic and suffocating nature of the Cuban regime.

What is most laughable about this is all the clucking by the official press over the publicity surrounding this issue. They insist that cooperatives are being set up with the desire and support of their members.

Of the first one hundred twenty-four that have been set up, one hundred twelve started out as state-owned businesses. This is another way of saying they were failed, insolvent enterprises headed by corrupt, inept administrators who later automatically became presidents of their cooperatives. Only twelve started out in the private sector, established, it is said, by self-employed individuals.

Rogelio Regalado, member of another organization called the Commission for the Implementation of the Reforms, has clearly described how certain bankrupt state enterprises underhandedly manipulate their workers by suggesting that they “voluntarily” become partners in a cooperative, telling them, “If there are no workers willing to become partners, the property and assets are liable to be auctioned off.”

Two hundred twenty-two small and medium sized state businesses — all problematic, unproductive and in crisis — were converted to cooperatives which are in theory fully autonomous. A wide range of services — including fresh fruit markets, restaurants and even shrimp farms — will come under this new form of management for which they have already coined the charming slogan “economic solidarity.” In other words, there will be more of the same.

It is a ruse intended to delay access to private property while they still can so as to hamper the country’s real agents of economic progress. This makes a mockery of consumers — in other words the public — which cannot find alternatives to satisfy their own demands and instead must continue subsidizing those of their exploiter, which is to say the regime.

José Hugo Fernández is an author whose works include the novels The Suicide Clan, The Crimes of Aurika, Butterflies Don’t Flutter on Saturday and The Parable of Bethlehem and the Shepherds. He is also the author of two short story collections, The Island of Blackbirds and I Who Was the Streetcar Desire, as well as a collection of essays, Shadows Against the Wall. He lives in Havana, where he has worked as an independent journalist since 1993.