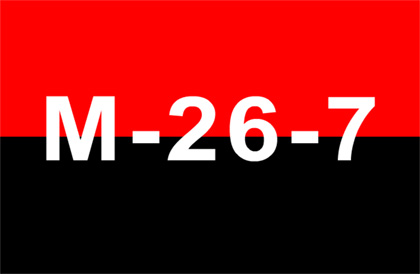 Rosa Maria Rodriguez, 27 June 2016 — For days now, due to the upcoming commemoration of the 63rd anniversary of the attack on the Moncada Barracks, Cuban television continues to repeat a spot with the fragment of a song from a musical group called Moncada, the chorus of which says over and over, “The 26th is the happiest day in history.”

The attack on the military fort in Santiago de Cuba, by the guerilla’s led by Fidel Castro, occurred on 26 July 1953 in coordination with the assault on the Carlos Manuel de Cespedes Barracks in Bayamo, during the dictatorship of Fulgencio Batista. Both actions failed. Lives were lost, young men were arrested and tortured — others were murdered later, according to the authorities — who should be remembered by this long-standing government with respect, not with anodyne songs that only send a signal of lack of respect for “their fallen,” hut which are an insult to their memory.

It is true I don’t remember — I never paid attention — all the words of this old song. Which such a chorus, anyone who isn’t Cuban can assume that it’s about a carnivalesque date.

The irony of the case, is that the director of the Moncada group is a deputy to the Cuban National Assembly and a nephew of one of the revolutionaries who were injured, imprisoned, tortured and later killed as a result of the assault on the Moncada Barracks.

It seems that anything goes in dictatorships and even forgive “the irreverence or the forgetting” of the dead when it is time to adulate the living. Also , it confirms that there is no exception to the rule that the authorities apply to their unconditional followers: the promotion of their works — regardless of the quality or the controversial conceptions — and convert them into a “hit parade” that plays on radio and television ad nauseam.

When this publicity material first appeared on television, I shared these opinions with Rafa, my husband, and now I share them also with my readers, because I do want someone to brand me as working to “correct errors” for friends, accomplices and/or protect those who hold us hostage and silence us.

There are no arguments to justify this TV spot and its advertising of the upcoming anniversary of those events seems farcical and sad to me. Will the approach to other cultures make them change western traditions of respect and homage to the dead? It seems that while the globe is homogenized with globalization, they insist on “deglobalizing” the world with the political-totalitarian counterculture on this continent.