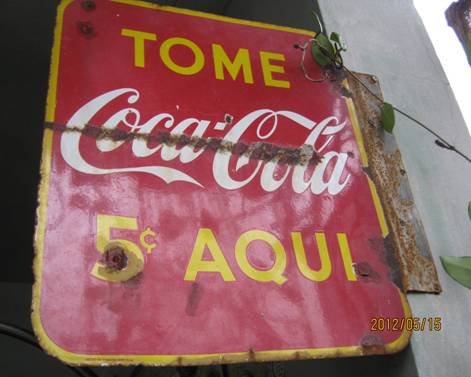 A few years ago, passing by with my friend in her car, I suddenly saw out the window, in the middle of some trash, something red that caught my attention.

She, ignoring my “almost order,” pulled to the curb and stopped.

I quickly got out of the car and went to the place where the neighbors had inappropriately accumulated right on the parking strip a mountain of trash. Standing out from among the rubble I saw an old metal sign printed with the fire of Coca-Cola. I took it out of the trash and put it in the trunk of the car.

When we got home, I washed it off and saw that in one corner it said, “Made in Canada 1950.” With the notice displayed on both sides, I imagined it had belonged to one of the thousands of bodegas throughout the city, hung on the corner so it could be seen from both sides. Without hesitating, I put it on my terrace overlooking the street, in the same way, to be seen from inside and outside. So it has remained since.

A few days ago, the street door open to enter the building, some kids came up and knocked on my door: “Lady, we want to buy a soda. You have a sign that says Coca Cola here at 5 cents.”

Look, I said to them, first I don’t sell sodas, but in addition, if I did sell Coca-Cola and at 5 cents, you would have to ask me if I had been medically certified, because for sure I would be crazy.