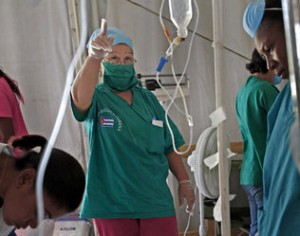 HAVANA, Cuba, 9 July 2013, Dania Virgen García/ www.cubanet.org.- For several days there has been an increase in the cases of cholera in the provinces of Havana and Guantánamo.

In Havana, where there are reports of more than 40 children admitted to the hospital, the municipalities most affected are Diez de Octubre and Cerro.

At Pasteur Polyclinic, on Santa Catalina Street, also in Diez de Octubre, on the 5th, a three-year-old boy, Abel Lizuela Martinez, was transferred in a delicate state to Cerro Pediatric

From Guantánamo, at the opposite end of the country, Niober García Fournier of the Cuban Youth Movement for Democracy, reported another death from cholera: that of José de la Cruz Castillo, 42 years old, resident in 12 Sur, between Santa Rita and San Gregorio, on July 1. He was in Room 12 Bed 3 in Agostino Neto Provincial Hospital. His wake was held for six hours. The health authorities barred the family from access to the interior of the funeral home, so they had to hold the wake for him in the street. The deceased worked in the provincial Meat Company.

Also, in Guantanamo prison there is a quarantine for cholera. Visits and the bringing in of articles to meet the basic needs of the inmates are restricted.