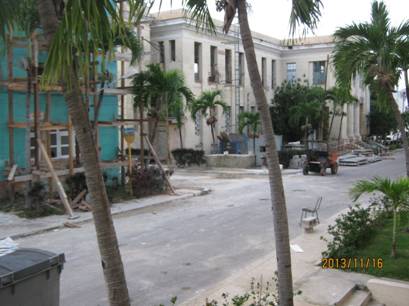 In “my planet” when a hospital goes under repair, it stops being a health center and it becomes a construction zone.  It has been approximately three years that the Hospital Docente Gral. Calixto Garcia has been under repair.  Some of the hospital’s pavilions have already been restored, but the work has been very slow and there are also many uncontrollable diversions of resources.  So much so that when they finish the last pavilion, they should start all over again with the first pavilions.

I have a friend who after negotiating and waiting, was finally admitted to the hospital.  He told me that when he arrived at his room with his assigned bed number, they told him that the bed was already occupied. Fortunately, the doctor that had attended him was still with him and explained that was not possible, that the bed had been reserved in advance.  They then apologized and the health workers themselves explained that the men with the stretchers were too tired to take the other patient to another floor so they decided to put the patient in that bed.

Last night, visiting my friend, he told me that he found out that when the hospital director was inspecting the floor above hours before the ceremony, there were very surprised when they checked the bathrooms to realize that the plumbing had disappeared.

During the investigations, they confirmed that their own employees, who had participated in the remodeling, had stolen the plumbing.  They stole the water faucets, the flushing systems, as well as other pieces of plumbing which they tied to a rope and dropped down through the back windows of the building, where an accomplice picked them up and took them away.

However, this was not the only incident that had occurred in his first day of hospitalization.  He told me that after settling in his bed, the nurses passed by to ask those who accompanies him and some patients who were in a condition to do so to come out to the entrance because the new director was going to visit and they needed to clean the room. After, my friend, looking into this with one of the employees, was told that “cleanings” were only done on very special occasions like that day, because they were paid a pittance and they didn’t even have adequate tools to clean, so “they didn’t stress about” hygiene.