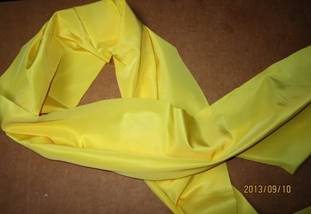 I always heard since I was a child that, as the midday sun intensified, the leaves on the trees would not move. This they called a “bochorno.”

After taking our turns on the internet, my friend and I decided to go shopping at some nearby area stores to look for cleaning supplies. We were taken by surprise at a new store, dedicated exclusively to the sale of such products, when we saw a large yellow banner hanging near the entry. We immediately realized what it was all about. Paraphrasing Jose Marti, I joked to my friend, “I do not know, given the flag here, if I can enter…”

Practically pushing me inside, she said laughing, “It’s not a flag. It’s only some yellow rag they’ve been told to put up.”

We went inside, laughing to ourselves and in a joking mood.

We immediately went up to the first employee we saw. He was sporting a makeshift bow on his chest made of yellow ribbon (the kind used for wrapping gifts).

“You must be a disciple of Our Lady of Charity; yesterday was her feast day,” I said.

“No,” he replied, “They’ve ordered me to do this today for the heroes.”

He lowered his head, turning red.

We then went to the counter where they sell the hair dyes and did almost the same routine with the employee there. Her response was immediate: “My boss told me that, if I was a Revolutionary, I had to put it on. Remember, I work for the state.”

She stood there in silence, looking at us with eyes that begged for mercy.

We left her since there were two customers behind us, looking in our direction while trying to stifle their laughter and nodding their heads.

We then went to a department store to see what they had, only to find ourselves face-to-face with the same spectacle. All the employees were wearing yellow ribbons and bows to match those displayed at the entry. We questioned the poor employee waiting on us, whose response was similar to the one we had heard before. It was then that I told her, a little impertinently, the way I saw it: “We should have decided to defend our real traditions instead, the ones that were stolen from us: Epiphany, Christmas, Christmas Eve…”

To that day’s “bochorno” we had to include our own. We had to acknowledge how we have inevitably let ourselves be manipulated for all these years, how most of our population continues to be submissive, subject to the induced fear which they have been feeding us for half a century. Unfortunately, we will be marking the twelfth like most people, submissively displaying something yellow, which also happens to be the color long associated with cowardice, now another one of our traditions.