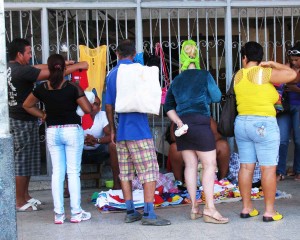 LA HABANA, Cuba, November, www.cubanet.org – To us, the most interesting part of the National Television News is the weather report. “There is no use in watching the news,” says Julio, an octogenarian neighbor, “just to hear that the whole world is screwed up and in Cuba everything is going very well”.

After a speech on July 7th, 2013 by General Raul Castro Ruz, first secretary of the Central Committee of the Cuban Communist Party and president of the Councils of the State and Ministers, a speech in which he criticized the Cuban people’s loss of values and the chaotic situation of the country, the news started transmitting on Tuesdays a series of reports titled “Cuba Says”.

The one aired this week has given rise to a series of commentaries among the people, for example, that the large amount of inspectors imposing high penalty fees and suspending licences is part of an arranged operation, without doubt created against the private small business owners, because in the State’s good service centers everything seemed to be too organized: employees wearing uniforms, talking about hygiene norms… for many it was obviously staged.

A neighbor was commenting: “Before giving the private owners the licenses to process and sell food products, they were inspected by Public Health, because that is what happened to my son before he could open the restaurant. How is it possible that right after they get closed because they don’t meet the requirements?” 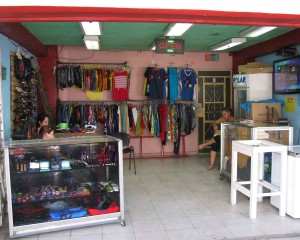 “They are clipping their wings, it’s not like they are becoming rich with their businesses”, another man says, “They are not fooling anybody: they gave out all those licenses to mask the massive layoffs in 2010, but as always, that’s a way to keep them in check and controlled”.

The lack of hygiene in the state centers where they process and sell food products is nothing new, unfortunately. Just to give an example, the bread that people eat daily, is left on a counter for hours, full of flies. The same employee handles the bread, money, and writes down on the food booklet with his bare hands. When the bread is covered we all know it is because an inspection is due. They deliver the bread to the so-called Paneras — where the bread is sold but not baked — transporting the bread in carts pulled by horses, a cart or a bicycle cart, and it is stored in open boxes, made out of plastic, wood or woven baskets.

People prefer the service of privately-owned cafeterias because of the quality of the products, the speed and quality of customer service that most of them offer, while in state-owned cafeterias the menus are very limited, and many times flies are part of the menu. Even the more expensive establishments, like some of the pastry chain Sylvain, have missing glass on the counters and flies have free access to the pastry. 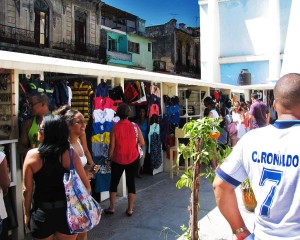 The cockroaches find a home in hospitals, urgent care facilities, and doctor offices, but also in food processing establishments: lunchroom, bakeries, and restaurants of selling in the national currency, the Cuban peso, or in CUCs, the Cuban Convertible Peso. This is the case of Plaza Carlos III or the cafeteria in La Rampa Movie Theater.

In the “bodegas”, where food rations distributed by the State are sold, rats are also found camping, that is why some employees have a cats in these establishments, hidden from the view of the customers. A neighbor was telling me how she didn’t dare to buy the rice last month, because she saw how the seller killed a mouse inside a rice bag and he didn’t even bother to throw it away.

The lack of concern on the part of the Government about the lack of hygiene is detrimental to the health of the population. The water pollution, the bugs in the trash that is not picked up for days, and other ills, are some of the consequences. People need their problems to be addressed with a real solution, instead of drawing attention away from them and using the small business owners as scapegoats.