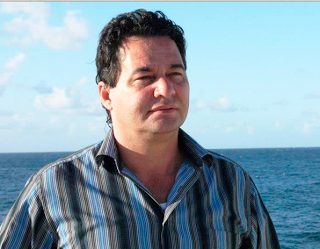 The renowned Cuban writer Ángel Santiesteban Prats has been sentenced to five years imprisonment for writing against the Cuban dictatorship from his blog “The Children Nobody wanted”. The news now travels the world.

As part of the strategy of overwhelming repression practiced by the Cuban political police since the arrival of Raul Castro to power, they are trying to criminalize the opponent accusing him of crimes that the defense has proven he did not commit.

The most notorious and shameful of this injustice is the interference of the political police at the procedural and judicial level, proving once again that the Cuban leaders operate as dictators imposing their political designs on all branches of society. The numerous violations in the case against Angel Santiesteban Prats clearly demonstrate that in Cuba for 54 years there has been no separation of powers, necessary in any truly democratic society.

Unjustly condemned, Angel Santiesteban demands a new trial, with respect for all legal guarantees and without the interference of the Cuban political police, as occurred in the trail that resulted in his current sentence.

1. The preparation of the outrage

One
Ángel Santiesteban is a writer who, as of 2006, was cited by the official Cuban culture as “one of the great storytellers emerged in the revolutionary period.” Two of his books: South: Latitude 13 (on the war in Angola) and Blessed Are Those Who Mourn are considered classics of the short story in Cuba. But because of the critical content of his books of stories, each publication of his books was made possible after many struggles against censorship and the books were never promoted outside the island.

Two
Disillusioned by the plight of his people, after a trip to the Dominican Republic where his friend the writer Camilo Venegas explained to him what a blog is, he decided to write his own blog and in 2008 created “The Children Nobody Wanted” which offers a very critical vision of the national disaster to which the Cuban government has condemned our island. He requested that his blog be hosted by  the Cuban Book Institute and was denied, so he posted it on the site, “Encuentro on the Red,” belonging to the Cultural Encounter Association of Cuban Culture.

Three
Many intellectuals in the service of the dictatorship tried to convince him to abandon his criticism. He also received political pressure from the police to stop writing. The Ministry of Culture decreed a complete silent censorship against his writing and intellectual work. He began to denounce these pressures in his blog.

Four
He was beaten in the streets of Havana by fake criminals. There is evidence that they were agents of the political police. One piece of evidence: as one of the alleged “criminals” beat him, he told him this was what he got for being a counterrevolutionary. Other evidence: in response to a critical post against the official propaganda manipulation of the “Reasons of Cuba” TV program, on March 21, 2011, that same program refered to his blog declaring him to be an “Enemy of the Revolution.”

Five
As has been shown by the independent lawyers defending him, a sustained campaign of criminalization began against him, trying to crush his prestige, accusing him of crimes he did not commit. The initial request from the prosecution for a sentence against him asked for 54 years, as if he were accused of genocide. One by one the defense shot down all the fabricated evidence and the most serious charges are dismissed, and the sentence request was reduced to just 15 years. Authorities expanded the process, hiding his file, which, as later demonstrated, was in the hands of an officer of the State Security. After three years, he was finally brought to public trail and the process concluded with his being sentenced.

Six
In November 2012, while accompanying other opponents at a police station in Havana, demanding the release of an opposition lawyer detained without charges, he was arrested, severely beaten and threatened with death: A political police officer named Camilo put a gun to his head and threatened to kill him. He then told him that he wouldn’t do it there, when he was in public, they would make his death look like an accident. He also told him, “Isn’t the five years in prison we’re going to give you enough for you?” when the court had not yet ruled.

Seven
On November 26, 2012, he wrote an open letter to President-dictator Raul Castro, accusing him of all the repression to which they were subjecting him and other opponents. He also denounced, in a video, that the political police were threatening to kill him.

Eight
Days after this letter, the decision of the Court in the trial against him was communicated to him: he was sentenced to five years in prison when the “invented crime” only deserved a fine, the only evidence being the report of an expert calligrapher who assured he was guilty because of the “slant” and “suspicious size” of his handwriting. Although the lawyer proved the falsity of other evidence, several irregularities that in fact invalidated the trial, and presented evidence that invalidates the calligraphic “proof”, he was sentenced to five years’ imprisonment.

Nine
He appealed to the Supreme Court, the highest body of Justice in the country. Without taking into account that his lawyers showed numerous irregularities that invalidate the criminal process, this Court upheld the sentence of five years imprisonment for “housebreaking and aggression.”

Ten
On February 28 he is locked in the Cuban prison of Valle Grande, as has been denounced in numerous well-known reports internationally, where they violate the human rights of most prisoners. Days later he was transferred to the “La Lima” internment camp, outside of Guanabacoa, an installation for prisoners convicted of minor offenses.