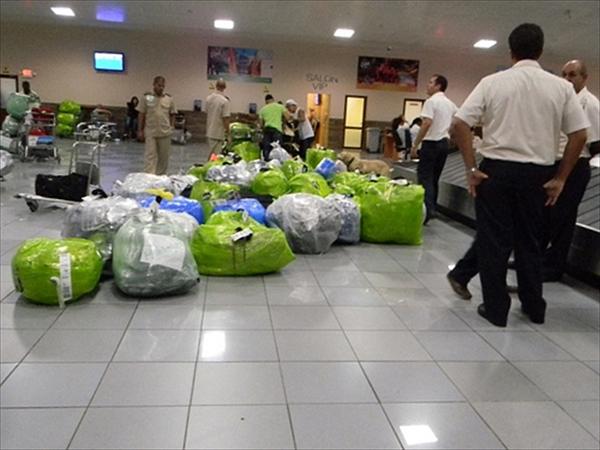 On March 7th I returned to Cuba from Miami and they seized seventy pounds of food from me. I doesn’t matter that I bought the ticket at the travel agency, sent the money and packages to my Country through “Go Cuba,” which is rumored to belong to the Cuban government and that currently offers 100 pounds free of charge. It was a traumatic flight on a Gulfstream Air Charter, for which we checked in to the terminal in Miami at 9:00 AM and left for Havana twelve and a half hours later.

Even before the new travel and immigration law went into force in January last year, for an ordinary Cuba to face the predators at customs, is not a setback when it comes time leave for abroad. The problems arise when you come home with the “junk” and other material needs to relieve some personal and family shortages with some of the “enemy’s money” in your purse.

The foreigners and Cubans living abroad run into the same luck when they travel to Cuba. It’s the government of my country that has converted the capital’s Jose Marti Airport into a stress chamber, psychological torture and extortion border for many travelers coming to this country.

I imagine the same happens with the other air terminals around the country. You have to face the arbitrariness, helplessness and caprice of a raw crude tyranny, where the law is an exhibitionist who walks naked through the streets and the airfields, nothing more. A return with the excitement of a reunion and here they seize our things with enthusiasm.

I returned melancholy about the family I was leaving behind, but compensation by the reunion with the family I founded almost 32 years ago: my two sons and my husband anxiously awaiting my return, who had announced they would be picking me up. I was among the first to get off the plane and also to collect my bags when they were spit out from the belly of the plane.

As I was going through the last control they announced the seizure. The food that my mother and sister, people with low resources living in Miami, had collected for months, was stolen by the Cuban border officials with their complex cheating Chinese-style thievery. Is it true that the authorities make laws so convoluted in order to facilitate the corruption of their officials, or were they “sent to kill” by the political police? And if so, why?

What did I do or say that upset them so much that they took reprisals on my arrival in Cuba? I told them everything humanly possible based on what I’d been told by General Customs of the Republic in New Vedado, whom I consulted repeatedly prior to leaving and whose telephone number is 881-9723.

I replied, but I couldn’t insist too much to avoid their taking reprisals and making it worse. It seems that the customs laws are one thing and those at the airport are something else. Even so, they tried to coerce me into saying I’d brought a router, which is simply prohibited to Cuban citizens to import.

Before my argument–which showed evidence of computer skills– that it was a wireless car, they chose to remain silent without consulting a specialist to confirm my explanation. Or is it, that thought I was meek and were pressuring me to upset me and get even more advantages? The other lady they also took things from that night broke into tears at the announcement of the confiscation. As she was an elderly lady, the attended to her quickly and gave her special treatment to avoid a medical emergency. She is living in Miami, and like me, was not allowed to pay for excess baggage.

However, behind us the people on the same plane went through the door laughing with their carts piled higher than ours, leaving behind officials who had attended them with smiling faces.

The sent me off to a corner of the terminal and punished me by making me stand there for three hours. They ignored that I’d been traveling since 9:00 AM in the Miami airport. When the airport emptied of passengers, the chief came with a gentleman with a green sack into which they threw all my mother’s and sister’s food. Looking at the color of the bag I could only think that it was a messages. I left there about one o’clock in the morning.

It wouldn’t surprise me if in a short time they make widespread the pillaging of the suitcases which weigh a certain amount when the tourists leave home and weigh “a few kilos more” per capita when they land at Cuban airports.

In addition to the confiscation, they fined me 1,450 pesos and to told me that I had a month to claim it. I decided that despite my indignation, I’m not going to challenge the customs authorities, because in Cuba there is not a State of Law. Nor will I put myself in the orbit of the bureaucracy and complicity with the entities in the industry, because all that happens when you engage with such machinery is that you wear yourself out. Also because the situation can occur that “winning” the case sends the wrong message about my commitments and loyalities.

This new setback only reaffirms for me that I’m on the right track when it comes time to fight and denounce the arbitrariness of a dictatorship that’s teetering. My appetites are freedom, democracy and social justice for Cuba, which contrasts with the petty and unjust greed of those who, like the customs workers, symbolize the “boogeyman,” stealing the pants off the trapped travelers through questionable and abusive legal figures. Bon appetit!