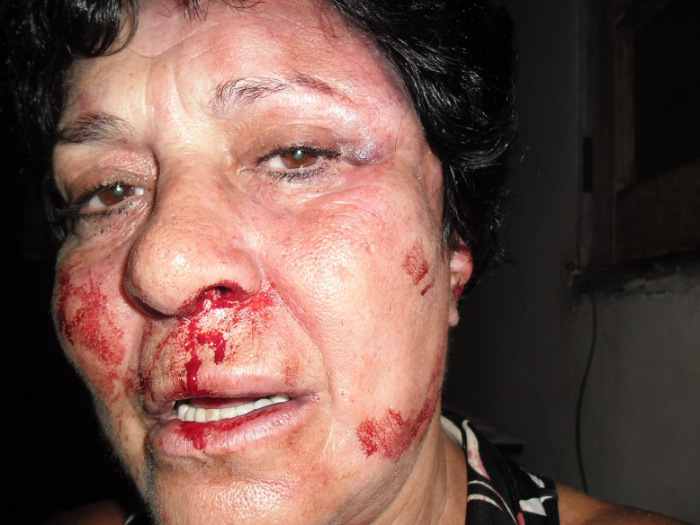 Ana Luisa Rubio, a censored and dissident Havana actress, received a beating outside her home on the afternoon of Friday, 6 September, that caused multiple contusions on her face, head and the rest of her body. A few minutes later I received her telephone call in Artemesia: I heard her terrified voice trying to tell us, but barely able to give any details.

Ana Luisa then received the supportive visit of several friends, and that night was accompanied by Antonio Rodiles and his wife Ailer to the emergency room at the Manuel Fajardo Hospital, where she received medical attention and a certificate of her injuries was drafted. That same day she made the relevant police report, for the umpteenth time, to bring charges against the aggressors.

It was impossible for me to travel at that time — transport to Havana at that hour is virtually nonexistent — and as I had a 24 shift on Saturday, I was only able to visit her on Sunday morning. It was not until I saw the extensive traumatic bruising around her left eye, in the corner of the mouth on that side, still swollen, as well as on other places on her body, that I realized the magnitude of the aggression.

Then Ana told me that that afternoon some kids, innocent lures, repeatedly rang her doorbell — which, she said, was consistent with a history of provocations that she has been suffering for years, and has reported a dozen times without that law enforcement authorities doing anything. When she answered the door an outrageously angry woman neighbor rushed her ready for action, followed by a stranger and in seconds there were several men, also unknown to her, who joined in the beating. The modus operandi said it all. The images speak for themselves. The impunity confirms all suspicions that State Security was involved.

Now, the obligatory reflection of this Cuban who was not an eyewitness to these events and which I will try to discuss as objectively as possible. To not get suspicious:let’s suppose it was the unheard of case of a neighbor, truly outraged, inexplicably seconded completely viciously by various strangers, men and women included. Would it not be a case of assault against the person,recognized as a crime in the existing Penal Code and therefore punishable?

Why, then, shouldn’t the authorities act vigorously to enforce the law, arrest the main aggressor, who lives a few doors from Ana Luisa — and expose the guilty? Honestly, I feel that this is a very remote possibility if we consider that the attack was consummated on a woman who despite her vulnerable nature has dared to challenge the absolute power.

I am completely certain that if, the attacked had been anyone other than that “uncompromising revolutionary” regardless of the reasons, Ana Luisa would already be ready for sentencing. But in this case something happens that can not be ignored: casually insist several days before — I insist it was casually, not to get too suspicious — in the afternoon of August 24, Ana had undertaken a one-person public act of protest in the Plaza of the Revolution, and that it does explain a lot.

So as I see it: as long as this is a country where there is a separation of powers and the Prosecutor allows such abuses; a country where the police authority, far from ensuring the safety of the person, is congenial in complicity with the oppressors; as long as this a country without a committed press, able to submerge itself in a sterile catharsis, but never risk a finger on the burning sore; as long as State Security and the Communist Party arrogate to themselves the power to organize the notorious rallies of repudiation and infamous beatings — denigrating, not for the alleged victims, but for those who perpetrate them; as long as freedom of opinion and association are constantly violated and fear corrodes the dignity of man; as long as there are cowards capable of taking advantage of the helplessness of women like Ana Luisa, nothing, absolutely nothing in this suffering country has changed.