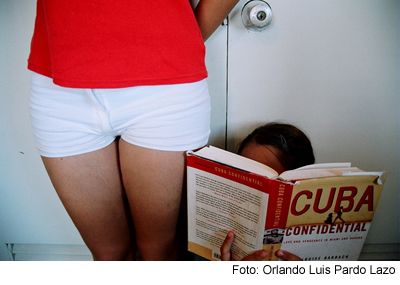 In the post, the author, in addition to captivating the audience with his interesting and entertaining writing style, gave shocking insights to a hypothetical group of students and their professor. This hypothetical situation embodies the typical teaching method of using videos and images, although those images in my opinion are more pornography than worth anything for sexual education.

I’m no expert, and I’m not going to question if the act is a product of a photo montage, or a real life case, but the evidence points towards something strange, novel or civilized project organized by CENESEX (Cuban National Center for Sex Education). It’s difficult to judge something only from looking at a couple of photos; but just by imagining the reaction that authorities would have in response to this publication, it is clear that the chain will break based at the weakest link.

This case reminds me of someone, who is known for their “proclivity to certain upreaching habits,” very well-known in the media, and even as of recently as the director of a news outlet. I won’t give more details out of respect for his children, especially his daughter, who was raped a few years ago by an “emerging teacher*” teacher while in the 8th grade in a Havana school, in the residential area of Nuevo Vedado.

In that case, the teacher and abused student were put at the mercy of the principal, who in following protocol, began to investigate although it became chaotic.

By the time the father, someone of high esteem and composure, arrived at the school, in his Lada car with a palpable rage and intent to strangle the teacher at fault, he was ready with cell phone lines open to the Central Committee, and he was focused more on prosecuting than on his own daughter who had been scarred by the ordeal itself.

Phones rang all morning, and the world was seemingly going to crash down, educational system and all, as clear as plain sight. From the secondary school emerged the victim, the accused, and accusers. They marched out in that same order, and made their way to the Municipal office of MINED, the headquarters of the Ministry of Education.

When they arrived MININT Building A, the sun had set, and the moon was watching over them, begging for justice. Meeting after meeting, the uncomfortable delegation argued back and forth through the Malecon. Then they crossed in front of the Spanish embassy, and ended their energetic march at the well-located office of the National Youth Union of Communists. That was the end of the story.

There was a big deal made about the situation, yet little was done after all. After a long-awaited a call from the President the injured father, in a very Freudian version of the destruction of the social order, was transformed into a motivational speaker. The daughter remained raped. And the teacher, being an actor in one of the Commander-in-Chief’s plans, that of “Emerging Teachers*,” wasn’t even tossed out.

Fortunately, many people in Cuba know that “When a motivated and strong people cry out, injustice trembles before them”. Trembling with laughter waiting for a foreigner, Cuba Libre in hand, ready to get drunk.

*Translator’s note: “Emerging teachers” was a program developed in response to a teacher shortage in Cuba, which quickly trained high school students to take over classrooms. Incidents such as this one (and including the death of a child at the hands of one of the teachers) led to the program being reconsidered.