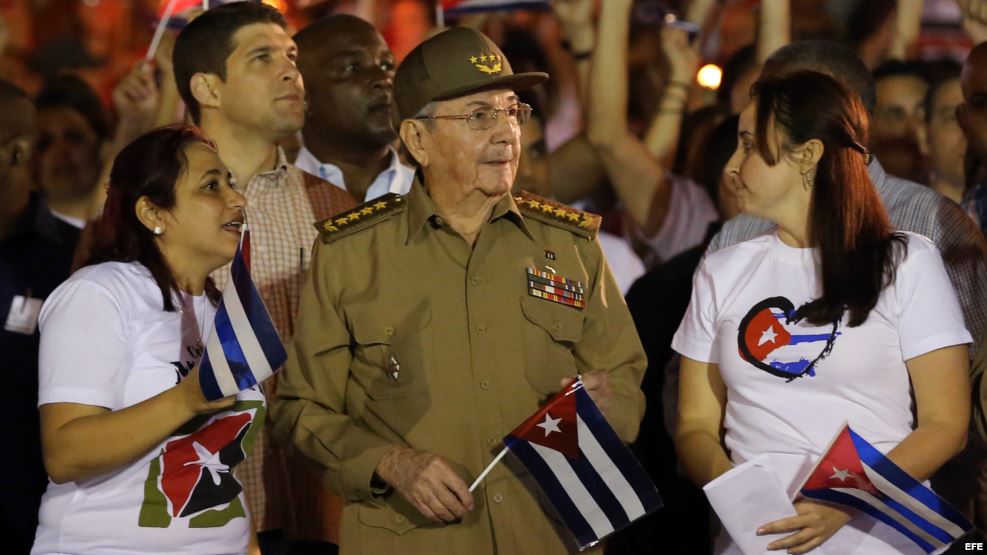 Juan Juan Almeida, 6 February 2017 — Officials, students, athletes, workers, members of the Committees for the Defense of the Revolution, foreign journalists and even tourists. Almost all have been victims of a flagrant, illicit operation authorized by the Cuban government. It is a business that involves millions, one that the Castro family is not inclined to give up: the production and sale of jerseys worn for non-stop campaigns and political marches.

Allow me to cite two examples.The visual common denominator during the series of tributes the Cuban people paid to Fidel Castro between November 29 and December 4 was a cloud of white T-shirts, some of which were printed with the phrase “I am Fidel.”

Millions of people sporting similar clothing paid their tributes at Havana’s José Martí Memorial, at events in Santiago de Cuba and throughout the tour of the late commandante’s ashes through the island.

The same shirts were seen on January 3 when hundreds of thousands of Havana residents and representatives from the Artemisa and Mayabeque provinces paraded in front of the Plaza of the Revolution during commemorations for the 60th anniversary of the landing of the yacht Granma and Revolutionary Armed Forces Day.

The Cuban textile industry is engaged in a process of technological revitalization intended to modernize its equipment and expand its capacity.

One beneficiary is the state-owned company Hilatex, which produces and markets towels. Others are companies such as Alquitex, which produces training uniforms for the Armed Forces and Public Health as well as sanitary tissues for expectant mothers.

Whether they are commercial in nature or not, all Cuban businesses — and this includes those whose products are handmade — are under a regulatory directive to buy T-shirts from an unnamed producer that nobody wants to talk about.

A source with access to the chain of production of this unique item — one which, like the mathematical constant and irrational number pi, shows up in every government parade and store — informs me that the product is both expensive and of poor quality. Nevertheless, Cuban businesses are obliged to buy them at three dollars per unit, twice its actual cost.

Let’s do a simple calculation. If we multiply $3.00 — the price Cuban companies are forced to pay — by the number of people wearing them in political marches, it is not unreasonable to think that the income generated by this business would be the envy of any number of companies.

In the midst of a major campaign to combat corruption, the question that arises is: Why does everyone turn deaf, dumb and blind when faced with evidence of a national crime?

A Spanish businessman, who struggles with all his might to combat this fraudulent monopoly, notes that he has met with the directors of the retail chains Caracol, TRD and Tiendas Panamericanas.

To all of them he has offered a product of higher quality at a lower price. He has made large scale tender offers and has even complained to the Chamber of Commerce of the Republic of Cuba yet he has never managed to break into the market.

“The Castros,” says this native of the Iberian peninsula, who asks in a pleading tone that his name not be used — “have a good eye for business and enough power to crush any competitor.”

Who is behind this hidden lucrative business?

The mystery would seem harder to crack than the formula for Coca-Cola. But dissatisfied men have no tolerance for secrets. The small, unknown factory that produces these textile riches is located in Punto Cero, the Castro family compound, and its operations are, without the slightest doubt, illegal. This is because it relies on unpaid military labor or, more precisely, slaves in battle fatigues.

And, like icing on a cake, we discovered that the person who runs this corrupt and profitable company is Alexis Castro, son of the late Cuban dictator. To be specific, this is a multi-million dollar business whose workplace conditions are without dignity.