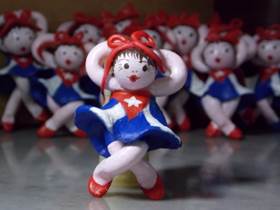 Rebeca Monzo, 16 May 2016 — During the recent meeting of the National Council of the Union of Writers and Artists of Cuba (UNEAC), archaic terms and concepts were were complacently dusted off in response to the reappearance in public of the Revolution’s aged leader.

In an evocation of old ghosts, the meeting took place in the exact same location where fifty-five years earlier his comments to intellectuals unleashed the great witch hunt that laid the groundwork for our highly ideological political culture.

During this meeting, the members of the Permanent Commission on Culture, Tourism and Public Spaces released a statement declaring, “Cuban writers and artists have reacted with surprise, disbelief and outrage at images of the reception for passengers on the cruiseship Adonia, which docked at the Havana port terminal early this month. Girls dressed in swimsuits that replicated the national emblem, imitating one of our traditional dances with their movements and providing a deplorable spectacle to those visiting Cuba for the first time.”

In light of the possibility of ideological contamination resulting from the reestablishment of relations between our country and the United States, the critic Rolando Perez Betancourt offered an alternative, suggesting that we not “succumb to fear of the vampire but rather avail ourselves of a silver bullet to kill it.”

It seems Betancourt has forgotten that those who first desecrated our national emblem were in fact the country’s leaders. The man at the forefront of the Revolution accepted an invitation to sign a Cuban flag presented to him by the head of the Union of Young Communists at the time on the main staircase of the University of Havana.

For some time now it has also been common to see flags adorned with a portrait of Che printed on them. Or to see groups of them hanging, without rhyme or reason, in shops and offices, or in the oversized windows of some state-owned enterprises, used like curtains to keep the sun out. Others fray and fade on the facades of government buildings without anyone ever thinking to remove and protect them.

Corraling a U.S. flag with a hundred ours, as this critic proposed, ignores our reality. Perhaps he is unaware that our tricolor flag (made in China) can only be purchased at hard-currency stores with CUCs, to which only a very lucky few have access.