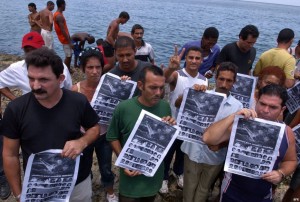 The sinking of the tugboat 13 de Marzo, on the morning of July 13, 1994, with over 70 people on board, ordered by the dictatorship that governs us, does not appear in the nation’s list of anniversaries.

It is a taboo subject. It has been deleted from the official story, so they do not remember the infamy, but it is important to remember that it has been 19 years since the horrific slaughter that still remains unpunished and that those who ordered it to be perpetrated still remain in power, and now they are trying to pass the scepter to their chosen ones in order to “retire or die quietly”.

This murder has been written about many times, and many others have been read with horror. Survivors testified that they managed to cross the Morro and evade the pursuit seven miles offshore. Their captors surrounded the tug in which they were fleeing, and did them in them with their prows and water jets.

One day, without the repression of the government as a barrier, the Cuban people will go to the Malecon with flowers and remember those 41 children, women and men killed at sea in the horrendous summer of 1994.

The same way we used to remember a famous guerrilla* in elementary school. Although we did not understand why, we walked after the teachers to the nearest stretch of coast to throw flowers in the water in honor of a rebel commander** who disappeared at an uncertain point along the coast.

Teachers told us that they searched for this rebel commander by air, land and sea for many days, although it wasn’t know where his plane went down.

Even though the authorities knew from the start the exact place where, in an single onslaught, fanaticism and intolerance had sunk the ship in which 72 Cubans were fleeing the tyranny, the bones of those 41 men, women and children killed remain abandoned at the bottom of the sea.

Relatives of the victims were not allowed to bury their dead. The weak excuse that the government had no specialized divers to recover them. Perhaps what the government feared was a spontaneous and massive burial, in which the tears of a people would make injustice tremble.

Fidel Castro justified the murder in a speech: “The workers’ behavior was exemplary, you can not say it wasn’t, because they tried to stop them from stealing your boat. What can we say now, let them steal the ships, your livelihood? What will we do with those workers who do not want them to steal their boat, who undertook a truly patriotic effort, we could say, to stop them from stealing the boat? What are we going to tell them?”

Those words acquitted the murderers, and denied to the families of the victims their right to justice. Any future investigation was prohibited. Any accusation from the families fell on deaf ears in the complicit courts nationwide.

But as Fidel Castro himself said in his time, “There is always time in history to hold each person responsible for what they did.”

Meanwhile, the souls of the victims emerge daily and roam the coast of Havana, and pray that one day they can finally rest on land in an ossuary with flowers and an epitaph.