Havana Times, Lynn Cruz, 7 May 2018 — Gerardo Mosquera, an important art critic and Cuban intellectual, made a gesture of solidarity towards me by inviting me to read his paper: “Utopia in Havana”, as part of a theoretical event which forms part of the Havana Alternative Biennial, which was independently organized and has received quite a lot of pressure from the Cuban government and institutions.

The news that I would be the one to give voice to his words made me forget my uncertain professional future for a few days, a future which the regime’s arbitrary decision has put in jeopardy, preventng me from working as an actress, even though I have always lived and developed my career as such in the country mostly.

With its secondary office at the Hannah Arendt International Institute for Artivism (INSTAR), led by Tania Bruguera, this theoretical event took place on Sunday and a considerable number of artists, academics and vendors attended, not only from Cuba, but from different countries such as Brazil, Norway, Denmark, Mexico, Spain and the US.

In this paper, Mosquera carries out a meticulate analysis of the Cuban government’s political maneuvers, by way of the founding and developing the Havana Biennial, which aimed to establish a South-South interaction, to connect artists in this hemisphere (the majority, he says), but really it aspired to transform Cuba into the leader of the Cold War, within the so-called Third World.

It’s interesting to read what Mosquera writes when he remembers the origins of the Havana Biennial: “If we are marginalized, we will create our own space.” He was refering to the isolation the US government had put Cuba in. However, I imagine this is the same reason which drove the #00 Havana Biennial’s founders to rebel against Cuban institutions’ own exclusion, who govern over what art needs to portray and create in an authoritarian manner, without taking artists’ needs and much less the public’s, into account.

As a result, the Havana Biennal has become the fifth ongoing international biennial in the world today. However, Mosquera, one of its founders, was never invited again. He also says that the rest of the official organizers continue to be the same group who set out with this project in the beginning and that they have no desire to change it.

This was made perfectly clearing when the Berlin Wall came down: “Cuba was unable to reinvent itself in the post-Cold War era. Instead of responding to new and challenging times, it introduced minor changes to keep everything the same,” Mosquera mentions.  Therefore, the Biennial was created within the Revolution’s utopiam which fit in with the community, with a participatory atmosphere, where students collaborated with artists voluntarily, in search of new talents and giving them an opportunity to exhibit their work, but it ended up becoming an arts market.

Mosquera draws our attention to how the #00 Biennial organizers’ bold act, which could learn from past experience, advocating for them: “to not impose a unilateral Messianism”, and goes on to add: “they have to remove themselves from the obsession of “changer la vie” which drives the utopia towards an authoritarian lack of reality.

He also quoted Eliseo Diego: “maybe the best reason to create a biennial is to want to make an exhibition, which doesn’t exist, come to life, and decide to make it yourself.”

In doing so, Cuba’s utopia will continue to take place until May 15th in Havana’s homes/galleries, in the Old Havana, Cerro, Playa, Vedado, East Havana, Marianao, Central Havana and even in Miami. 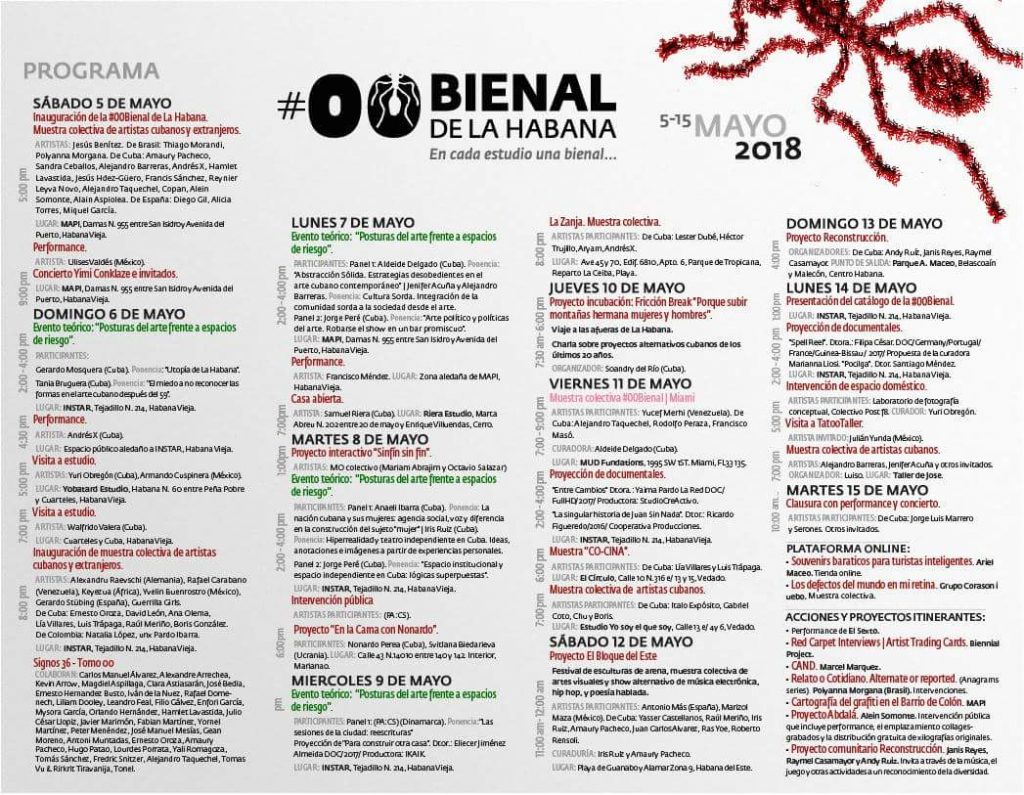 Translation from the Havana Times