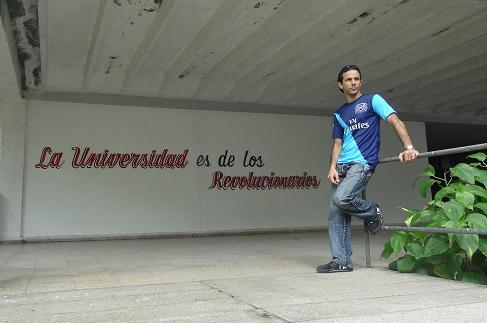 The University belongs to the Revolutionaries, says the slogan on a central wall of the University of Camagüey, the first opened by the government of the older brother, Big Brother, in the gray gray gray years of the seventies, on the northeast side of my city. But today, when sometimes we feel just half gray, we look around, a little sadly, to see that little has changed.

I haven’t woken up yet, but, like in a Monterroso story, I see the sign, the dinosaur footprint, is still there.

The 2012-2013 school year has ended, and the reforms in this country don’t touch the essential: respect for the other. Even Ignacio Agramonte University — as if The Older had once refused equality of rights to his enemies — displays the same discriminatory sign in front of which I was photographed 7 years ago, recently expelled from another university.

A dean of this place still shouts this little phrase at a meeting, and a rector, from ISA (Superior Art Institute), remembers the student he ordered out of the university. Still the university, like the armed forces, elected offices, political and business administration, the press, the diplomatic service, “solidarity” missions, and who knows how many more things on the island, are not for all Cubans: they are for the Revolutionaries. The country still is not with all nor for the good of all, but for the Revolutionaries — and even for them, to top it off, all they get is leftovers.

We all know today that the only requirement to be a revolutionary is to remain silent, smile and look away while Cuba is falling apart on us. The best revolutionary in Cuba is he who tries to revolutionize the least.

Ignacio Agramonte is the same university that expelled Harold Cepero and other boys at the beginning of 2000, when they collected signatures for the Varela Project. It is the same place where the freedom of other friends as turned bitter while they studied and worked there.

It’s where some who knew me have said, “Beware of being friends with Henry Constantin.” But this post is not only about the trip I took this afternoon to the University of Camagüey and its little sign stinking of apartheid; it was to talk about everything Cuban universities lack.

Cuban universities need not only to erase this sign. They also need to raise salaries and student stipends, reconstruct and modernize their facilities and services, de-politicize the internal rules, authorize free association among students and professors and remove all the partisan controls on their properties.

We also need to support non-state universities — because a single educational system is the best way to prepare us for the single command — to update the curricula, become more focused on technology and information sciences, eliminate military and political subjects, connect professors and students with the reality of the country and the word, and empower them to influence it, so that physical and spiritual exile are not the only options.

Cuban universities urgently need to become self-sustaining, modify subjective and imprecise evaluation methods, measuring only academic and creative performance, abandoning discrimination in admissions according to geographic provenance, increasing the evaluative demand, applying exposition and opposition of ideas in the classes, introducing the civic and human component in the curricula.

It’s a lot, but to eliminate the little sign would be a good step.  Or to change it so that we make it into a wall-museum, where our children and grandchildren will stop for a minute, and remember that that university and that Cuba should never return.