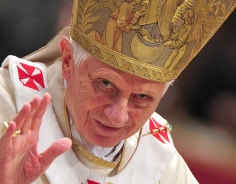 Pope Benedict XVI never ceases to amaze us. His recent resignation is another of those surprises on this fragile seeming pope made of sturdy fiber. He has surprised us since his rise to the papacy, with his marked difference from his predecessor, with whom he was such a close collaborator. Who could follow in the footsteps of this telluric man, a true force of nature, with an inexhaustible and overwhelming pace. Benedict found his own way, his own style of being Pope.

A phrase coined by a Spanish theologian — “With John Paul II one goes to Rome to see the Pope. With Benedict XVI one goes to Rome to hear the Pope” — speaks to us this of the difference. The encyclicals, speeches and homilies of the Pope fill several volumes in which the depth is not at odds with the elegance and clarity: is a continuous call for coherence of faith with life. They are a continuous call to meet with Jesus and the renewal of faith. If it is true that the number of pastoral visits, and their duration, declined compared to those of John Paul II, it is also true that a careful scheduling has allowed the Pope to be present throughout the length and breadth of our vast world.

We Cubans had the chance to experience the pastoral concern of Benedict XVI during his visit in 2012. We know the difficult path of negotiations that led to the first papal trip to Cuba in January 1998. Since the late 70s, when John Paul II set himself the task of being the quintessential evangelist among the nations of the earth, the Pope’s visit to Cuba was always present in the heart of the Pope and his bulging travel agenda.

But the circumstances that preceded and accompanied the collapse of the socialist bloc in Europe made it difficult, almost impossible, for Pope Wojtyla to come to Cuba. All America, and almost the whole world had already received a vicit from the Pope and Cuba remained, unvisited. Finally, in 1998, after lengthy negotiations, the longed for visit of John Paul became a reality for Cubans.

The then Cardinal Ratzinger was an eyewitness to that visit and to its haphazard preparation. Which did not stop him, on the coming of the Jubilee Year of the Fourth Hundredth Anniversary of the presence among us of the blessed image of the Virgin Mary under the name of Charity, from again taking the staff of a pilgrim and returning to Cuba, this time as Universal Pastor. A pilgrim for the Charity and of the Charity. One more among the humble visitors to the Sanctuary, the Basilica of Cobre, who came to honor the Mother, to proclaim and celebrate his fidelity to the Son.

Among the cares and chosen destinations of Pope Benedict, and one of the last, there will have to be Cuba. He came to bear witness to us with his support and to enlighten us with his wisdom, and to make us aware of his condition as a simple worker in the vineyard of the Lord, faithful to Jesus, confirming the faith of his brothers.

Now, to surprise us once again, as he has done in these almost eight years of his Roman pontificate, the final step of the resignation. Before him, Paul VI and JOhn Paul II raised the possibility, but did not take the step. Since Celestine V, in the Middle Ages, it has not happened again. But, faithful to his conscience and as an expression to his service to the greater good of the Church, Pope Benedict leaves his post in the hands of the same Church that chose him eight years ago for this ministry. Benedict XVI, prudent man, gives us testimony that “true wisdom is made of great audacity.”