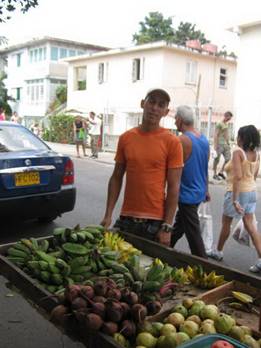 I had no intention of returning to the issue of state inspectors, which I addressed on 14 April of this year under the title “Inspectors: the new plague.” However, subsequent events witnessed by me and verified information given by some vendors on their own, the main victims, force me to do so.

Let me make myself clear, I am not against State inspection, but I am against the arbitrary manner in which it is performed and its methods. Going after a self-employed seller, as if he were a criminal or a fugitive from justice, at the first opportunity, punishing him with excessive fines — no lower than 250 pesos national currency the minimum monthly wage of a Cuban — is not inspecting anything, rather it is a witch hunt, especially when these inspections are not undertaken of government facilities, most of which remain dirty and unhygienic, as if there were no health regulations for them.

To fine a seller of homemade crackers or a vegetable seller 500 National Pesos because they stayed in one place for more than 20 minutes, is absurd and unjust. So is fining a candy seller who sells outside a school, given the demand of some clients, because according to the inspector this is prohibited because children can make themselves sick and the school director is responsible for their health. Yet at the same time the school is filthy, unpainted, with areas and bathrooms closed off, the drinking water — if there is any — comes directly from the street, there is a lack of drinking fountains, the hygiene stands out for its absence, and the students, without any cafeteria, have no lunch, it being replaced by what’s called a “hearty snack” (a little bread with some pasta and a miniscule glass of soy yogurt), which is not a snack much less a hearty one.

What is striking is that the voluminous apparatus of inspectors is directed only against the self-employed, who pay high monthly taxes (600 Cuban pesos to sell cotton candy on a corner). It seems that it is only them who the authorities are interested in inspecting and it so happens that by fining them they take away the meager earning they can get, in order to avoid their becoming rich and a part of the famous 1%, leaving them to belong to the 99%.

The plague continues making its rounds without any kind of control, and in the face of the rejection of the majority of the population, who every day reject it more and support the self-employed vendors, who offer better and more varied products and services than the establishments of the State.