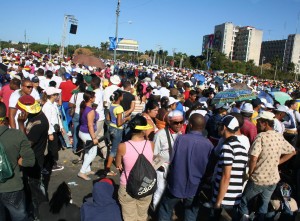 HAVANA, Cuba , August, www.cubanet.org – Every Cuban must have heard countless times a compilation of phrases that try to encompass all the Island’s popular wisdom: “don’t bother”, “you’re not going to solve anything”, “what the heck, you are not going to change anything”, “don’t look for trouble” , or this next one, which is the paradigm of evading commitment: “I don’t care about politics”, though the ones who utter it ignore that mere membership in the Committee for the Defense of the Revolution implies a direct relationship with the politics of government.

All of them, without exception, could be part of a manual on how to better serve the interests of the dictatorship because they appeal to passivity, to limitless waiting, to subordination, and to complicit subterfuge. But, without a doubt, the crown jewel and the one most frequently used is “don’t call attention to yourself”. It is the quintessential advice, and it serves to brake the spontaneous impulses of any dissatisfied individual in any circumstance, because “to call attention to yourself” in Cuba is to leave the flock, to rebel against absolute power, to fault at the most elementary prudence, and it can manifest itself even in the smallest sign that could set the individual apart from the rest.

It is interesting that such a no-nonsense phrase should be the currency in a country where people don’t think twice about hurling themselves into the sea and crossing the Florida Straits on board any artifact buoyant enough to take them to the other shore, to another realm, where calling attention to yourself isn’t necessarily an imprudence, but just the opposite, most of the time.

But let someone express his intention to stop paying the syndicate, the MTT (Territorial Troops Militia), not attending the May Day parade or the assembly of accountability for the well-known phrase “don’t call attention to yourself” to make its appearance.

Recently, a young man working in a private restaurant told me about a visit an official of the national union made to his place of employment, to educate employees about the importance of “creating” a union, affiliated to what she called” the national union movement”, to “defend the workers’ interests.”

It’s beyond the absurd, only possible in Cuba, that a State official will interrupt the work of a private business to encourage employees to organize to make a stand against management – the prime and essential reason for unionizing — with the complacent consent of that same management, and with the independence that a true syndicate must have as its premise the freedom to associate, which doesn’t exist in Cuba.  The strangest thing of the matter is that the vast majority of workers in those private businesses have joined the “syndicates” created from and by the same power that has unleashed a wave of layoffs at State workplaces.

My young friend insists that, initially, some workers were reluctant or undecided, and there were those who naively asked if membership was compulsory, but, here and there, an infiltrated delegate would drop the little phrase “don’t call attention to yourself” and the stirrings of rebellion were diluted, wrapped in the protective anonymity of the collective.

“It is the philosophy of the shoal, the school of fish,” says my friend, a definition that is based on the tactics of the sardine or anchovy in which the individual is diluted in the group so he’ll have a better chance at survival, which, however, does not prevent predators from feeding on them.

I acknowledge that my friend is somewhat cynical, but this does not negate the gist of his remark. And the civic abandonment and the lack of rights in Cuba is such that it has developed a kind of slavery syndrome of thought, so that when some people have a modicum of freedom, they refuse to make use of it and continue to be subjected to the snare and the master.

Nevertheless, the emergence of private initiative could mark a major turning point in the resurgence of sectors that might strengthen the weak fabric of civil society, a reality which the independent unions that exist in Cuba cannot ignore. This requires implementing a program, or at least for these groups to make specific proposals which are attractive to this new labor force. It would be an essential step to achieve union autonomy.

Government’s interest in keeping this labor force subjugated indicates the recognition of the risk implied by the potential autonomy of the sector; an opportunity that activists could well take advantage of in order to fight that widespread social evil, the shoal philosophy.