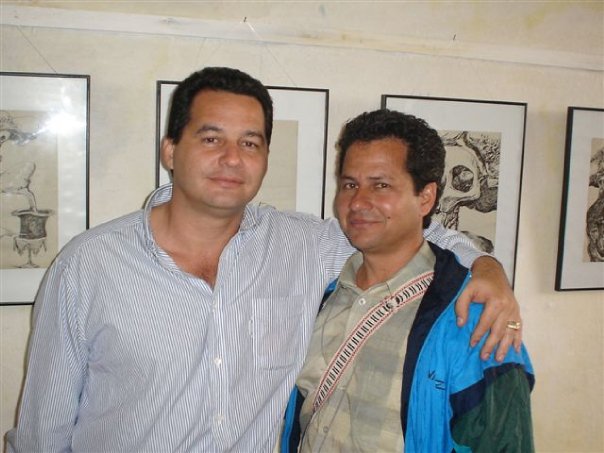 Any injustice against a single person, represents a threat to everyone.
Montesquieu

“God makes us, and freedom joins us.”

This post I owe to the brave writer and friend Rafael Vilches Proenza who, by dint of talent, earned the recognition of the intelligentsia of the Island.

Vilches has followed the call of conscience to do his duty, and responding to his  feelings, forgot the gifts that the Government gives to those who follow its dictates without opposition; thus, he is about it enter the Cuban insile, his career as a ghost writer beginning, and now many who call themselves friends will distance themselves from him, especially those who were, for a time, advising him to leave this path of freedom and continue to suck on the teat of the State.

They ar already plotting some strategy, so I ask my friend Vilches to walk with firm steps. State Security is on the hunt, searching, trying, how to muddy, at times, without an alibi, the desperation with which they carry out their coarse punishments, as in my case, but they don’t know that the lash of their whip tastes heavenly, giving us another reason for living.

Dear Vilches, welcome to the space of decorum, of transparency, tired of speaking sotto voce, after making sure that nobody will be listening to an honest judgment.

I swear I’ve heard those who called themselves friends, who wrote me extravagant dedications in their books — and then came forward to sign the document of the “eight women against violence” — being more critical of the government than I am; as also happened with my literary masters, hearing their discontent, their pleas for a way out of the crisis and a political change, but then, when it was time for decency, they showed caution and moved the flags, writing odes to the leaders of the dictatorship, and signing whatever open letter is organized against their colleagues.

Vilches, my brother, now it touches me to be in solidarity with you, you have stayed to give me encouragement since the regime launched its filthy thrust. I am experiencing the contradiction of feeling myself happy to know that History will not record you as pusillanimous, that you prefer to remain silent to not exchange your dignity for perks, but in turn it saddens me to know that misery you will receive from many around you, the betrayal, the loneliness; yet I predict for you that in the end you will have the compensation of one who stays by your side, worth more than a hundred, how else would you have discovered false friends, the cowards?

I only ask that you notice that in addition to the fear in their souls, they are acting in a mediocre play, none will go down in literary history, so they do it, because it’s the only way to be valued as writers and receive trips abroad, of those who bring soap to clean the skin because they have soiled their spirit; of those who have been taken over by UNEAC. Do not expect solidarity, nor even bureaucratic protection from what is supposed to the space that represents artists, to defend us; because that place is just another arm of totalitarianism.

In the end history will render its accounts, because history is what matters, it is where you can live forever.

From my captivity I send my thanks to you for joining the fight against the dictatorship.

The embrace of forever, your brother Angel.

*Translator’s note: “Settlement” is the euphemism for the Ministry of the Interior “special” prison where Angel is now being held.