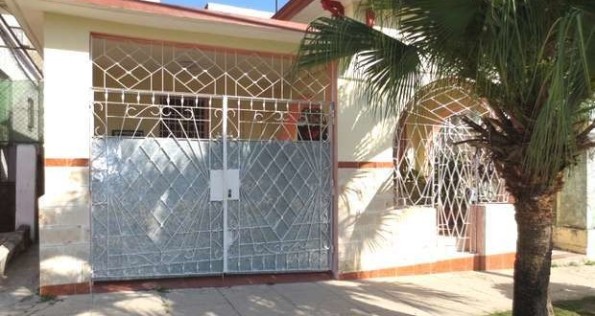 Ivan Garcia, 2 October 2015 — While waiting for the intermittent autumn drizzle to stop, Cecilio, a housing-swap* broker in Havana, watches the re-broadcast on a local sports channel of a bio about Chicago Bulls player Michael Jordan on his 42-inch flat screen TV.

He glances at his watch from time to time and peers out the shutters to see if the rain has stopped. “I’m waiting for a client who wants to sell a two-bedroom apartment with a garage. We have a four o’clock appointment to look at it, but the rail will cause a delay,” he says, annoyed.

Cecilio has been engaged in buying and selling homes for 23 years. “This business works if you are serious and businesslike. And you can earn good money. When it was illegal I looked for one or two thousand dollars for every sale. Now less, but I have enough clients to never stop. The sale of homes in Havana is an irregular market. There are fat times and thin times,” he confesses.

According to this master of swaps, “people are not stupid. They ask a price for an apartment as if it were in New York. But if the house is in El Vedado, Mirarmar, Fontanar, Sevillana or Casino Deportivo and has a garage, the sale is a sure thing,” and says, puffing on a menthol cigarette.

“A house with a garage in ordinary condition will sell for no less than $50,000 dollars. And an apartment in a building with a parking lot around $30,000.” says Cecilio.

Why does a garage raise prices so much in a real estate transaction? I ask a specialist at the Housing Institute in the 10 de Octobre district.

“For years, in Havana, there has been a marked lack of garages for cars. Dormitory-cities ahve been built, like Alamar, Mulgoba or San Agustin, without garages or parking spaces. Vehicle owners have had to make do. So you see improvised garages in public spaces or in doorways. Having a garage in Cuba is worth 30 CUC a month (around $27 US), simply for the idea of renting it to store cars. If it is used for a snackbar, bar or other business, the earnings can be higher,” says the specialist.

Herminda, a talkative and amiable old woman lives in a large house a stone’s throw from Monaco, the commercial area between the Havana neighborhoods of Sevillano and Casino Deportive. And for 5 CUC a day she rents her garage to a private entreprenuer who sells bread and pastries.

“That’s 150 chavitos (convertible pesos) a month. Fifteen times what the government pays me for my pension. With this money I’m not a burden on my children. I can go to the theater and every now and then eat in a private restaurant,” she says laughing while petting the ears of her restless dachshund.

Three years ago Lourdes took advantage of the boom in 3-D cinemas and on returning from a visit to Miami brought a more than 70-inch TV and professional audio equipment.

With two dozen black leather armchairs, fifty pairs of polaroid glasses and air conditioning to keep the room at 62 degrees fahrenheit, she reconverted the ramshackle garage filled with household junk into a 3-D cinema.

“But those people (the regime) banned it. I had invested more than $8,000 and I still haven’t recovered the money. Then the cinema went underground. I charge 2 CUC a person. And sell a cup of popcorn and a soft drink for 1 CUC,” says Lourdes.

If you walk around Havana you’ll see hundreds of garages transformed into small private businesses. From snackbars, bars, candy stores, barber shops, beauty salons, photo or video studios or even artisan shops where the trader, discreetly, whispers to you that he or she sells fashionable clothes under the table and perfumes at bargain prices.

Eleonora and Carlos Manuel, a couple living in Nueva Vedado, jokingly say they should ask for an offer on their garage.

“Thanks to the garage we could set up a photo or video studio for quinces (girls’ 15th birthday celebrations) or weddings. The garage is what lets us give ourselves a few luxuries, like staying in a hotel two weeks a year in an all-inclusive package in Varadero,” they point out.

Yosvany lives in a two-bedroom apartment, facing Cordoba Park, in La Vibora neighborhood. He is selling it for 30,000 CUC (about $27,000). “Several buyers have told me to the price is too high. But I tell them my apartment has a large private underground garage.”

If you have patience, says Cecilio, the housing-swap broker, “You can sell with no problems: the apartment can be restored and improved, but the garage is insurance money they exceeds the $24 a month that the State pays a worker.

Following the broker’s advice, Yosvany prefers to wait for a better offer. If there is one thing a Cuban knows how to do it is to wait.

Photo: Roofed Garage in a house near Avenida de Acosta, in Lawton, 10 de Octubre district in Havana. Built in 1945, it is in excellent condition. Like many in Cuba, it is fully gated and among other amenities has a 24-hour water supply. It was on sale for 35,000 thousand. Photo taken from Havana Keys, real estate agency specializing in the buying, selling and renting in Havana.

*Translator’s note: Until recently it was illegal to buy and sell housing in Cuba and transactions had to be arranged as trades, which gave people a chance to trade up or down according to their needs and finances.