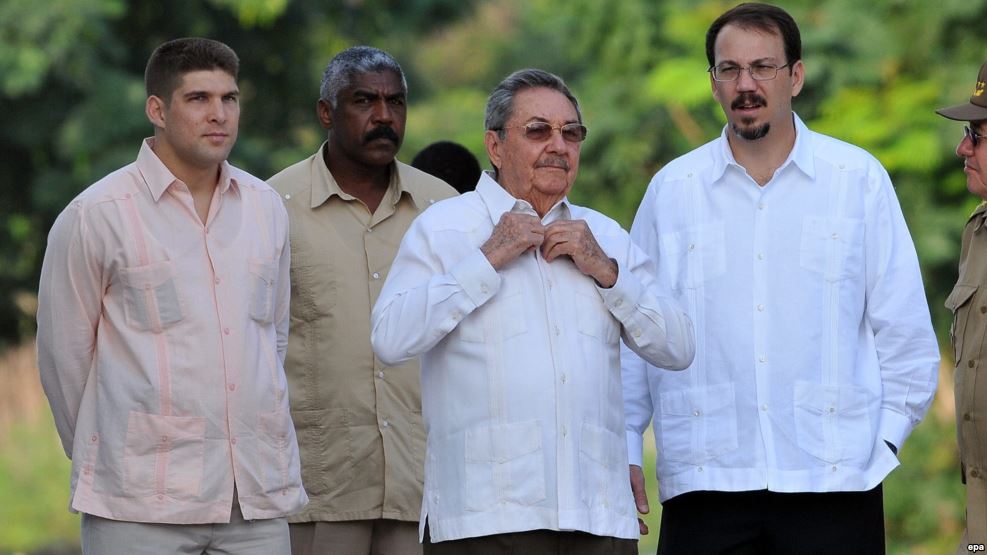 Juan Juan Almeida, 29 August 2016 — The most powerful of all the Cuban generals, Division General Humberto Omar Francis Pardo, was replaced in his job as Head of the General Direction of Personal Security (DGSP).

The position is now filled by Raúl Guillermo Rodríguez Castro, who is known by various nicknames, like “The Crab,” “Grandson-in-Chief,” Raulito” and even “The Arnol-mal,” this last one from his frenetic addiction to steroids and exercise.

Before creating the Commission of Defense and National Security, which Colonel Alejandro Castro Espín directs today, the Direction of Personal Security was the invisible apparatus with the most power on the island. Under this nomenclature, like the current “Commission,” ministries, institutions and all the MININT (Ministry of the Interior) divisions were subordinated.

“After a long period of stress, and multiple disagreements, Francis suffered a cerebral stroke. He was admitted to the hospital but now is at home,” said a family member of the dismissed General.

The DGSP, intended to protect the force of the myth, the fiscal and moral integrity of Fidel Castro and the rest of the so-called leaders of the first level, has succeeded in amassing more cash than some armies.

The DSP relies on a section of the transport police in order to review the fastest road or route for moving the leader. It has a film group, with experts in the art of photography, where they touch up the images of the “untouchables.” Another section is dedicated to documentation and migration matters and also functions as a trip coordinator; an anti-attack brigade consists of snipers and experts in every type of explosive; and a medical department, in addition to having a clinic for everything, has a fixed allocation of doctors, nurses, radiologists, physical therapists, laboratory technicians and other health workers.

They have a division of technology and telephone, workshops, diving masters, gymnasiums, coordinators; a very effective counterintelligence service that, in coordination with other State agencies, looks for, manages and controls all the information of that brotherhood, the family circles and friendships; a department of international relations that coordinates with other secret services the visits to Cuba of people of interest and personalities (friends or not), whether they are presidents, governors, heads of State, members of Congress, religious leaders, etc.; a purchasing group in charge of pleasing even the most bizarre tastes; a department that checks the news that should or should not be released about the Cuban leaders; and a unit to contract service staff (maids) who later work in the houses of those chosen.

With this new appointment, Raúl Castro, in addition to putting his grandson in a key post, captures a vital space reserved uniquely to Fidel, to control even the most insignificant thing, like the ruling class’s privacy in their homes. This method can have a possible boomerang effect, because it also assures the rejection from a good part of a strategic force that, older and in the military, were always faithful to General Francis.

All the body guards of this prestigious group belong to the DSP. Their work consists of taking care of them, protecting them and satisfying them even in their most quirky desires, in addition to spying, recruiting and blackmailing, in order to maintain, at any price, the “moral purity” of the Cuban politicians. This convoy is in charge of avoiding any type of problem of the leader and his closest family. And when I say “any,” it’s any, from the most absurd up to the most complex, whether it’s financial, political or legal.

In Cuba, nobody can prosecute, criticize or punish a bigwig or family member, without the authorization of the DSP.