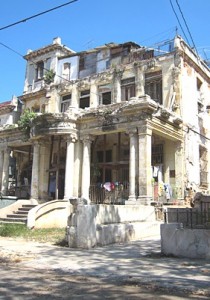 HAVANA, Cuba, August, www.cubanet.org –The identity of El Vedado has been in jeopardy for a long time.  This neighborhood in the old Elegant Havana is no longer a museum of modern architecture.  Here Cuba entered modernity, which was always an accent of its identity.  It wasn’t just a neighborhood founded by families of the aristocracy, it was also a neighborhood of tourism and prosperity.

This neighborhood, which germinated from the forest, today has aged very badly. It is a scrap of city that is no longer prepared to handle hard hits, its views have been sacked, deteriorated and blurred, it stopped being an ostentatious site and today its facades are merely a game of appearance.

I remember the homeland of my childhood as a hospitable place, an ecological settlement in which the way of life breathed dignity.  Having been born in the Sagrado Corazon and being from El Vedado demanded an etiquette of distinction and elegance, even among the humblest.

Teresa, a woman from Guantanamo who was born in La Loma del Chivo, vowed, from very young, never to go back to her hometown: “I arrived in this neighborhood in 1962 –she testified–and I was dazzled by El Vedado, one could distinguish the personality this place held, it had its own glamor, it was a place where one breathed decency.  Back then, the beat of a drum, witchcraft and the sacrifices of animals under the ceiba tree was foreign to this place.  Today this identity has disappeared and a culture of flip flops and barracks has been superimposed.

With the new social contract pushed by the Revolutionary inquisition, the customs and culture of El Vedado, as a style of life for the elite of Havana, was amputated by decree and replaced by a culture of barbarity.

The Hotel Trotcha, the Govea and Alaska buildings, or the gardens of the Loynaz home, are some of the lost local patrimony.  The Alaska building, that could have been saved, was destroyed by dynamite, and today in its place is the park of the Provincial Communist Party Committee.  It’s possible that the same fate awaits the Medical Retreat building, located on N, between 23 and 25.  Cinematographic rooms, such as the Gris theater, and cultural plazas, such as the Casa de la Cultura Checa have been lost.

According to Hilda, a Havanan born in the neighborhood of Cayo Hueso, today many mansions in El Vedado are citadels: “I remember that here there weren’t many ancestral homes, among them were the home of the Chalas, now known as Blumer Caliente, and the Guillermina home, where the most troublesome family was that of Silvia, known as La Cochina, white with dark hair and eyes, who left the country in 1980.  Now there are other places , such as La Mierdita (The Little Shit), El Sopena, el Hormiguero (The Anthill) and the Pentagon.  Chivalry is over, as is good taste and the pride we once felt for this place.” 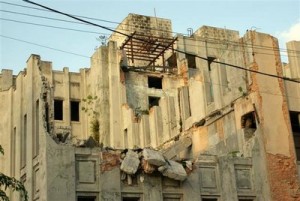 The few places with foreign currency have cancelled opportunities for free entertainment of the common people.  The Vedado Tennis, today the Jose Antonio Echevarria Social Circle, is a jungle in which the floating class free their repressions and lay out the trash talk.  The Club Sayonara is a sad warehouse of food administrated by the Provincial Management of Gastronomy of the People’s Power of the municipality.  The Escondite de Hernando and Club Oluku clubs disappeared and were transformed into a piloto* for the mass consumption of beer.  The feeling vanished from Pico Blanco.  The children’s hospital Pedro Borras, and the maternity ward, Clodomira Acosta, have been waiting to be demolished for more than 20 years.

While El Vedado continues to lose its role as the Garden neighborhood it once was, new places are being superimposed, as part of the emerging economy: Dulcilandia (Candyland), La Farandula (Showbiz)  and La Moraleja ((The Moral).  The walk along the Avenue of the Presidents is the sanctuary of the urban tribes (emos, rockers, preps and gangsters).  The culture of parks is also crumbling, the Victor Hugo (H and 21) or Medina and Menocal are now animal cemeteries, for the permanent offerings to the ceiba tree of the spirits.

A long time ago, El Vedado stopped being this elegant gentleman, an intellectual dressed in white with a blue cummerbund.  Of its traditions, which constituted their own culture, all that is left is the eroticism of La Rampa and the romanticism of the Malecón.

*Translator’s note: The name “piloto” comes from Plan Piloto (Pilot Plan) that began around 1969 after the regime expropriated all the remaining small businesses, including bars, in 1968. There was still a need to sell beer to people to keep them happy-ish, and the regime turned many of the bars and clubs into cheaper “beer halls” under the Plan Piloto.  Cubans started to call these establishments “pilotos” (singular: la piloto).  In short, a piloto is a trashy, dirty, state-owned beer hall. [The translator thanks one of our most faithful collaborator’s mother for this explanation.]

He lives in the city of Havana.