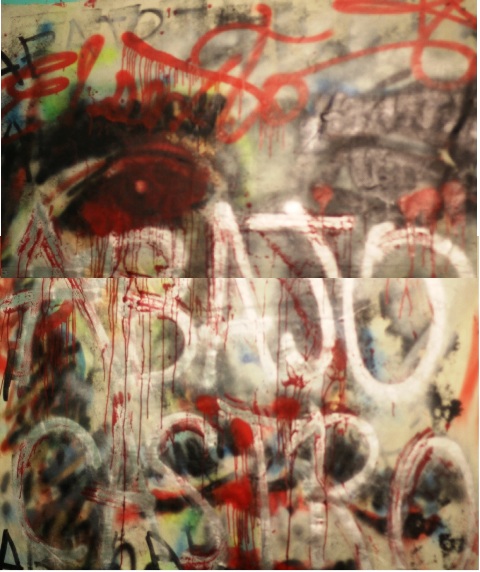 Tall like a pine and genuine in his desire to express himself through art that is ephemeral and challenging, describes the young Cuban graffiti artist, Danilo Maldonado Machado — alias El Sexto (The Sixth) — who does not smile at the spring greenery nor the excess of tropical light, despite a love for the colorful trees and ocean breezes that cool the bustling night on the streets of Havana, the city whose walls are the objects his paints, as explicit and allegorical as the reality that he tries to capture with spray paint.

It’s not that El Sexto wants to beautify this bittersweet city that defies moisture and time and official apathy. More than embellish, his nocturnal murals call the attention of the bored capital pedestrians, accustomed to looking without seeing or listening without hearing in the midst of violence and the helplessness generated by the servility and cowardice induced by the despotism of the State.

And so he has problems with the political police and the other police, who control the order and carry out the order to arrest him on the public street for having a spray can in one of his pockets and later they made a search of his house and seized his works and painting supplies as well as fining him a thousand pesos without specifying the crime he committed.

In a short video shot by photographer Claudio Fuentes, El Sexto refuses to pay the fine because “I would demonstrate that I’m doing something wrong, that being an artist is a criminal act.” And he says: “I prefer to force the courts to make a judgment for me to demonstrate how and why I’m doing harm.”

We hope that Danilo Maldonado Machado, whose pseudonym satirizes the demented political campaign of the Castro regime to free to Five Spies convicted in the United States, comes out well in this new police hunt, one among so many detentions and searches to dissuade him from his “disturbing” street art.

For those who wish to know the urban odyssey of this Havana artists who exercises freedom of expression without permission, I suggest you go to his blog, located in the Vocescubanas.com portal, where there is the video made by Claudio Fuentes. You can also read the enlightening article from the writer Ernesto Santana Zaldivar, who recreated the last fight of Sexto against the police and legal harassment on this island of automatons dressed as functionaries and of intellectuals vaccinated against common sense.

In my case, I can attest to the personal, artist, and solidarity value of this tall boy who draws, with banned spray cans, stars and satiric cocks and naive and frightened faces. I met him several times at the house of Yoani Sanchez — famous author of the blog Generation Y — and at the residence of the physicist Antonio Rodiles, leader of the virtual program Estado de Sats; in addition to attending and commenting on for Cubanet the Exhibition put on by El Sexto in the apartment of the singer Gorki Aguila, on October 29, 2011. I brought to Spain the sheet that Danilo Maldonado Machado painted on my floor in Central Havana, days before we caught the plane to freedom. El Sexto converted this sheet into a protest my being held in police custody that is a testimony to denouncing and friendship.