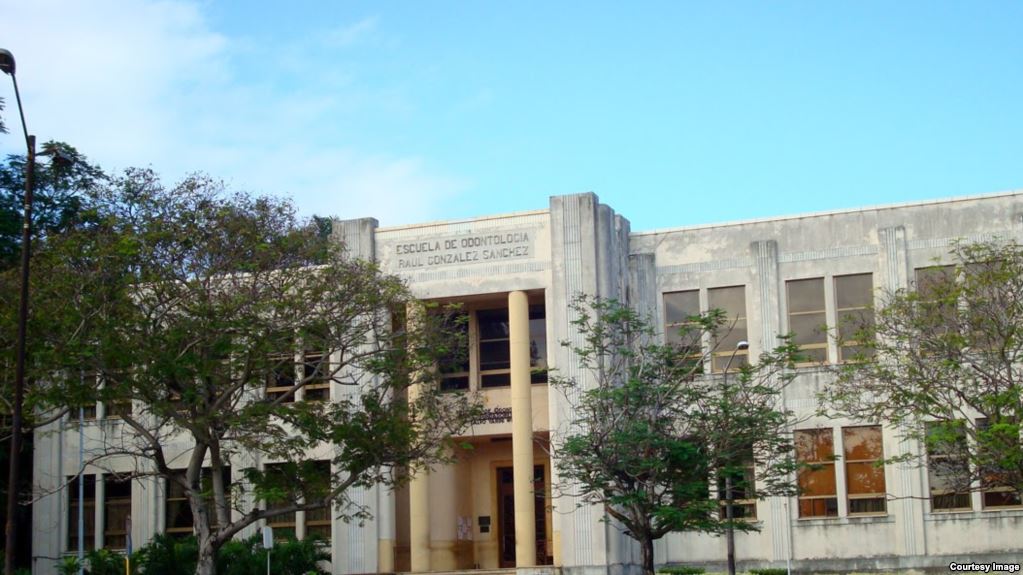 Juan Juan Almeida, 23 June 2017 — Located in the stately building with its exquisite art-deco style, at the Havana intersection of Salvador Allende Avenue (formerly Carlos III) and G Street, is the Cuban symbol of the oral health system. Officially known as the Raúl González Sánchez Dental Medicine Faculty, it is also on the point of collapse.

“The budget is tighter than the screws on a submarine. Most of the time the autoclaves used for sterilization don’t work, nor is there aseptic paper to wrap the dental instruments in; but the human material is there. Prices fluctuate between 15 and 300 CUC, according to the treatment or the urgency,” says a person who travelled from Miami to be treated in the “signature” Havana institution.

“There is no air conditioning in the treatment room, the windows are open and they have to position the chairs to avoid facing the sun. So you either bring a fan, or spend an extra 50 CUC to be treated in an operating room where there is only hygienic equipment, green clothing and adequate air conditioning. Being treated in Cuba, besides being cheap is folkloric,” my interlocutor continues, in tone so celebratory it provokes indignation. The saliva extractors are broken and so you have to bring a bottle of water and towel. And when the slime accumulates the dentist says, “spit it out.”

According to the constitution currently in force on the island, the Cuban state guarantees free medical attention to the population as one of the fundamental social paradigms; but the Healthcare system is suffering the restrictive effects of lack of resources because of the economic crisis, neglect, corruption and negligence, which among other things is a consequence of political mistakes.

“The politics of the country stipulate that the attention of every dental clinic should be free from payment; but then there is what we experience,” explains a professor of the fames institutions, who prefers to remain incognito, because to survive he has, at home, an old dental chair, a light and a pedal machine.

“Unless it’s an emergency, getting a regular appointment is very complicated and the receptionists charge for facilitating it. We have to live,” he breathes deeply and recites his price list. “For a mouth exam, prophylaxis, a light filling and a clinic diagnosis — 15 CUC. We visit many patients, the majority with chewing problems, gingivitis, periodontal disease. These conditions require long treatments, and this case they cost 2 to 10 CUC per visit. There are more expensive ones that require complex operations that in some other country would cost around $10,000 or more. Of course, the difficulties of the country force us to tell patients that to avoid problems they should bring their own anesthesia and the braces should they need orthodontic treatment.”