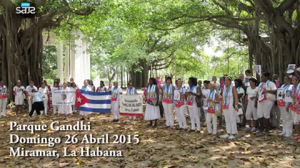 The current actions by the Cuban government are a response to the silence of the international community. END_OF_DOCUMENT_TOKEN_TO_BE_REPLACED