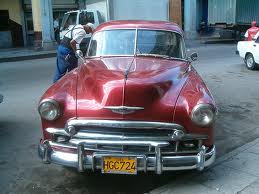 Most of the private cars in Cuba are old, built around 1939, 1941, 1955 etc. None of them have seat belts or airbags, which increases the number of fatalities in an accident.

Private cars don’t have seat belts or airbags at the steering wheel. Also government vehicles are like this too, and their passengers a vulnerable in any accident.

A government driver in the Instituto Nacional de Educación Física y Recreación (INDER), who preferred to remain anonymous says “I have been driving a (Russian made) Lada 2107 for two years and it hasn’t had seat belts since the day they gave it to me.”

A mounted policeman explained that most of the traffic is made up of old cars. “Many of the old cars have brakes which rely on water with detergent in place of proper brake fluid” explained the traffic cop.

Ricardo López, 35-years-old, says he has a friend who places his trust in water and detergent rather than spend money on brake fluid. “The reality is that drivers trying to save money don’t buy brake fluid,” added López

The modifications to the old cars: exchanged motors, transmissions, gearboxes, and even loss of the structure of the vehicle in order to get more people in. These things are everywhere in the streets offering private transport services, “But nobody bothers about safety,” says Carlos Ramírez, aged 42, a passenger.

Adrian González, 32, comments that the car he is driving is a ’52 Chevrolet, “the car has had its chassis modified to carry more people,” says González

An accident in Independence Avenue (Boyeros) is usually catastrophic.

Independence Avenue is one of the roads where you get many old adapted cars, which are made into racing cars and which are driven at excessive speed.

Private cars are mostly ancient machines with a very rigid chassis which in turn adds to the danger because they it do not absorb the force of the impact, while modern cars are designed to absorb the force of impact, as well as having the benefit of seat belts and air bags on the steering wheel.

But not everyone has the opportunity to buy a one- to three-year-old car. The economy doesn’t permit it, the old crates are more affordable in terms of paying back the loan.